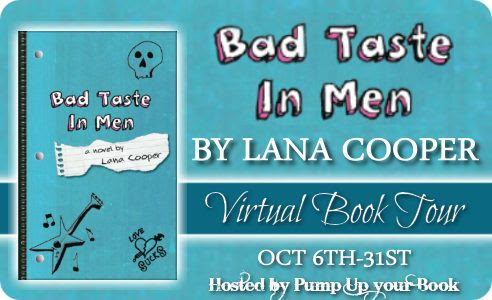 Pump Up Your Book is pleased to bring you Lana Cooper’s BAD TASTE IN MEN virtual book tour October 6-31! 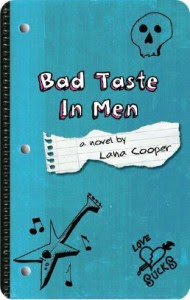 Title: Bad Taste in Men
Author: Lana Cooper
Publisher: Delightfully Dysfunctional Books
Pages: 352
Genre: Humorous Nonfiction
Format: Paperback/Kindle
Have you ever felt like even Mother Theresa has got more game than you?
If you have, you’d be in the same boat as geeky, awkward metalhead Nova Porter.
Bad Taste In Men follows Nova from her prepubescent years through young adulthood and her attempts at getting dudes to dig her.
Juggling self-esteem issues, small town outsider status, and questionable taste in guys, Nova is looking for love in all the wrong places – like the food court at the mall. Nova’s circle of friends and her strange(ly) endearing family more than make up for what her love life lacks.
Along the way, Nova alternately plays the roles of hero and villain, mastermind and stooge; picking up far more valuable life lessons than numbers for her little black book.
One part chick lit for tomboys and one part Freaks and Geeks for kids who came of age in the mid-’90s, Bad Taste In Men is loaded (like a freight train) with pop cultural references and crude humor.
From getting laughed at by your crush to being stood up (twice!) by a guy with one eye, Bad Taste In Men showcases the humor and humiliation that accompanies the search for love (or at least “like”) as a small-town teenage outcast, managing to wring heart-warming sweetness from angsty adolescent memories – and jokes about barf and poop. 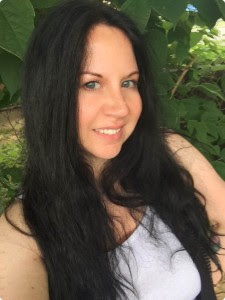 Lana Cooper was born and raised in Scranton, PA and currently resides in Philadelphia. A graduate of Temple University, she doesn’t usually talk about herself in the first person, but makes an exception when writing an author bio. Cooper has written extensively on a variety of pop culture topics and has been a critic for such sites as PopMatters and Ghouls On Film. She’s also written news stories for EDGE Media, a leading nationwide network devoted to LGBT news and issues. Cooper enjoys spending time with her family, reading comic books, books with lots of words and no pictures, and avoiding eye-contact with strangers on public transportation. “Bad Taste In Men” is her first full-length novel.


Her latest book is the humorous nonfiction, Bad Taste in Men.