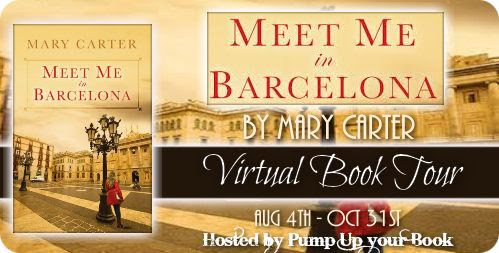 Pump Up Your Book is pleased to bring you Mary Carter’s Meet Me in Barcelona virtual book tour August 4 – October 31! 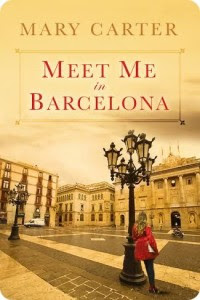 Title: Meet Me in Barcelona
Author: Mary Carter
Publisher: Kensington
Pages: 352
Genre: Mainstream fiction
Format: Paperback/Kindle/MP3 CD, Audiobook, MP3 Audo, Unabridged
A surprise trip to Barcelona with her boyfriend, Jake, seems like the perfect antidote to Grace Sawyer’s current woes. The city is dazzling and unpredictable, but the biggest surprise for Grace is discovering who arranged and paid for the vacation.
Carrie Ann wasn’t just Grace’s foster sister. Clever, pretty, and mercurial, she was her best friend—until everything went terribly wrong. Now, as she flees an abusive marriage, Carrie Ann has turned to the one person she hopes will come through for her. Despite her initial misgivings, Grace wants to help. But then Carrie Ann and Jake both go missing. Stunned and confused, Grace begins to realize how much of herself she’s kept from Jake—and how much of Carrie Ann she never understood. Soon Grace is baited into following a trail of scant clues across Spain, determined to find the truth, even if she must revisit her troubled past to do it.
Mary Carter’s intriguing novel delves into the complexities of childhood bonds, the corrosive weight of guilt and blame, and all the ways we try—and often fail—to truly know the ones we love. 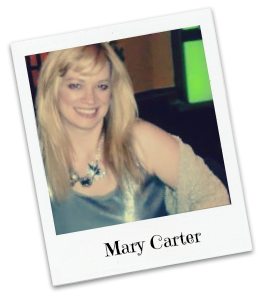 Mary Carter is a freelance writer and novelist.  Meet Me in Barcelona is her eighth novel. Her other works include:  Three Months in Florence, The Things I Do For You, The Pub Across the Pond, My Sister’s Voice, Sunnyside Blues, She’ll Take It, and Accidentally Engaged.  In addition to her novels she has written six novellas: Return to Hampton Beach in the anthology, Summer Days, A Southern Christmas in the upcoming 2014 anthology Our First Christmas, A Kiss Before Midnight in the anthology, You’re Still the One, A Very Maui Christmas in the New York Times best selling anthology Holiday Magic, and The Honeymoon House in the New York Times best selling anthology Almost Home. Mary currently lives in Chicago, IL with a demanding labradoodle. She wishes she could thank her gorgeous husband, but she doesn’t have one. In addition to writing she leads writing workshops.
For More Information

Mary Carter is giving away 3 books including My Sister’s Voice, Three Months in Venice and Sunnyside Blues!
Terms & Conditions:
Good luck everyone!

a Rafflecopter giveaway
at September 03, 2014