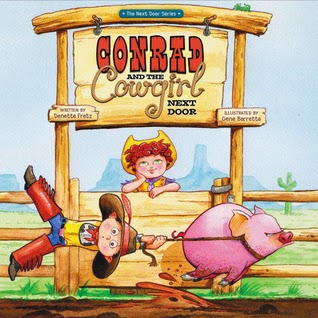 I hear that becoming a cowboy can be dangerous. Especially if you don't know the rules.

I don t know the rules.

It s a good thing Conrad brought his Mega Ultimate Extreme First Aid Kit to Uncle Clint s ranch because learning how to be a cowboy turns out to be a lot harder and more painful than he thought. Conrad has a lot to learn including don t squat with spurs on and never wave your red sweatshirt at a bull. But the biggest challenge of all is dealing with Imogene Louise Lathrup, the know-it-all-cowgirl next door. When Imogene shows up, she is all too happy to point out Conrad s shortcomings. In this follow-up to their debut hit Pirates on the Farm, author Denette Fretz and illustrator Gene Barretta team up once again to tell a humorous tale about what it means to love your neighbor. 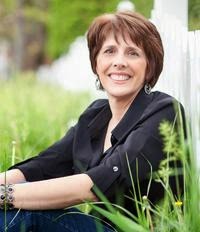 About This Author
Denette Fretz is a first grade teacher whose passion is crafting inventive, engaging stories that encourage life-application of biblical principles. Fretz resides in Oregon with her husband, two teenage children, a sassy cat, and a spastic Jack-A-Bee. Her hobbies include singing, drawing, playing the guitar, and collecting picture books.


About this author
edit data
Gene Barretta is the author and illustrator of Now & Ben: The Modern Inventions of Benjamin Franklin and Neo Leo: The Ageless Ideas of Leonardo da Vinci. He is also author and illustrator of Dear Deer, which was a Notable Children’s Book in the Language Arts and listed on the Parenting Magazine Mom-Tested Books of the Year List. He holds a B.F.A. in Film Studies from New York University, and has worked for many years in film and television production. He lives in Wynnewood, Pennsylvania with his wife and son.

When I read this book with my 8 year old, I knew from experience what was coming; Conrad had better out smart that girl next door. He began giggling looking at the front picture of Conrad being dragged by a pig. What a great way to draw children in, and the bright colors were a great add.
A delightful story, and my boy loved it, and he was laughing at some of the antics to become a cowboy. He enjoyed that Conrad had that Mega Ultimate Extreme everything. He was hysterical at adding a little bit of hot sauce, or should we say mega amount!
There are some great lessons here, and the main one being forgive your enemies. What a great directive for everyone. He had a great time with the poems at the end, and wanted to go back over the story and the delightful illustrations.
What a great book to add to your children’s collection!

I received this book from the Publisher Zonderkidz and was not required to give a positive review.
at September 22, 2014