The Sister Season by Jennifer Scott 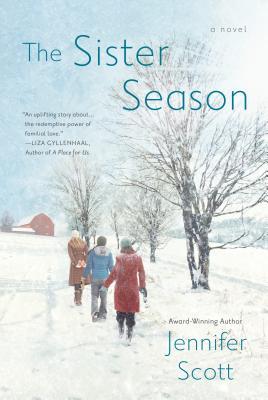 It’s December 21, and the Yancey sisters have been called home. When the girls were young, holidays at their family farm meant a tinsel-garnished tree, the scent of simmering food, and laughter ringing through the house. But as the years unfolded, family bonds fractured, and the three sisters scattered and settled into separate lives. Until now. The Yancey sisters are coming to spend the holidays with their mother. They’re also coming to bury their father.

Claire, the youngest, a free spirit who journeyed to California, returns first. Then comes Julia, the eldest, a college professor with a teenage son of her own. And finally there’s Maya, the middle child, who works so hard to be the perfect mother and wife.

During the sisters’ week together, old conflicts surface, new secrets emerge, and the limits and definitions of family are tested. And as the longest night of the year slips by and brightening days beckon, the sisters will have to answer one question: When you’re a sister, aren’t you a sister forever?

Two-time winner of the Erma Bombeck Global Humor Award (2005 & 2006), Jennifer’s weekly humor column appeared in The Kansas City Star for over four years, until she gave it up to be a full-time young adult novelist.
Jennifer’s debut novel, HATE LIST (Little, Brown Books for Young Readers, 2009) received three starred reviews and was selected as an ALA Best Book for Young Adults, a VOYA “Perfect Ten,” and a School Library Journal Best Book of the Year. HATE LIST also won the Michigan Library Association’s Thumbs Up! Award, and received spots on the Texas Library Association’s Taysha’s high school reading list as well as the Missouri Library Association’s Missouri Gateway Awards list, and has been nominated for the Oklahoma Sequoyah Award. Jennifer’s second novel, BITTER END, (Little, Brown Books for Young Readers, 2011) received starred reviews from Publishers Weekly and VOYA and was nominated for a YALSA 2012 Best Fiction for Young Adults.
Jennifer writes and lives in the Kansas City, Missouri area, with her husband and three children.

There is a lot happening in this story. We are at the Christmas season, and now the Yancy sister's are home for their Father's funeral.
This is one dysfunctional family, These girls grew up without a childhood, their father was a brutal alcoholic.
We have a Mom who is happy her Husband is dead, but misses him. One sister, is in love, but cannot commit. Another has a child that is suicidal, and another is married to a man that has cheated on her all during their marriage.
As we enter their world you will be appalled at how they have been treated, and how their Mother put up with this. Two of the sisters basically hate one another, or I should say, one hates the other one.
Is their any hope here? Can all these years of abuse be reversed, and having these woman lead fairly normal lives?
This is a rather sad read, and one that shouldn't be happening, but it does. The book does read quite fast, and you want to know what is going to happen next.

I received this book from the Publisher NAL and Edelweiss Reviewer Program, and was not required to give a positive review.