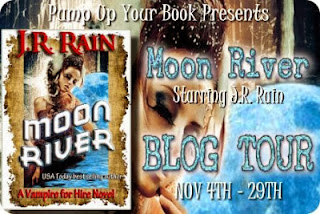 J.R. Rain is an ex-private investigator now writing full-time in the Pacific Northwest where he lives in a small house on a small island with his small dog, Sadie, who has more energy than Robin Williams.  He will be publishing a slew of new novels over the next five years, so stop by often and check out what’s new.

His latest book is the contemporary fantasy/mystery, Moon River.

Seven years ago federal agent Samantha Moon was the perfect wife and mother, your typical soccer mom with the minivan and suburban home. Then the unthinkable happens, an attack that changes her life forever. And forever is a very long time for a vampire. Now in MOON RIVER, private investigator, Samantha Moon, is asked to look into a string of bizarre murders, murders that are looking more and more like the handiwork of a bloodthirsty vampire. But when her sister, Mary Lou, goes missing, Samantha, Allison and Kingsley take the fight underground...into the dark heart of a vampire's lair.

Purchase your copy at AMAZON 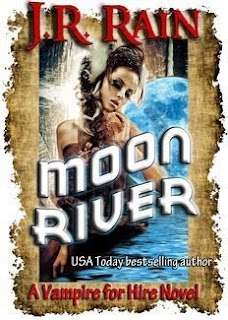 Seven years ago federal agent Samantha Moon was the perfect wife and mother, your typical soccer mom with the minivan and suburban home. Then the unthinkable happens, an attack that changes her life forever. And forever is a very long time for a vampire. Now in MOON RIVER, private investigator, Samantha Moon, is asked to look into a string of bizarre murders, murders that are looking more and more like the handiwork of a bloodthirsty vampire. But when her sister, Mary Lou, goes missing, Samantha, Allison and Kingsley take the fight underground...into the dark heart of a vampire's lair.
First Chapter:

I would miss Judge Judy today, which was always a damn shame. Judge Judy should be required viewing for anyone without a backbone. Tough woman. Fair woman. Scary woman.

My kind of woman.

Instead, I found myself being escorted by a young cop with perhaps the third- or fourth-cutest buns I’d ever seen. I ranked his buns right behind Rand’s, the UPS driver who’d turned out to be a vampire hunter. Officer Cute Buns led me down a hall that ended up being far too short. I had just barely started ogling him when he turned to me, smiled and motioned for me to enter.

I did so, smiling in return, and I think I might have—just might have—had me some smiling sex.

Waiting inside was, of course, Detective Sherbet. I knew he would be waiting for me because he’d called and asked me to come down and meet with him. I also knew he was inside because I could smell the bag of donuts from the hallway.

Who I wasn’t expecting was the tall guy sitting opposite the detective. He was tall and dark-haired and sporting shoulders nearly as wide as Kingsley’s. Nearly.

“Detective,” I said to Sherbet, who made no attempt to stand. Rude. Then again, the old detective had been gaining a little bit of weight these days, and he was veritably poured into that chair.

I heard that, he thought, telepathically catching my thoughts. The detective, among a small handful of others in my life, could read my thoughts...and I, theirs. I might have put on a little holiday weight.

It’s the summer, Detective. And there’s no ‘might have’ about it. I’m a trained observer.

Well, the Fourth of July is a big deal in the Sherbet household.

I grinned. He didn’t, although he did look down at his growing belly.

“I didn’t bring you in here to judge me,” said the detective.

“Excuse me?” said the other gentleman, who had been looking at me, but now snapped his head around to glance over at Sherbet.

Sherbet, unfortunately, still hadn’t quite gotten the hang of telepathic communication with someone like me. The old guy would occasionally blurt his thoughts, rather than think them. Rookie.

“Nothing,” said Sherbet. He motioned to the partially masticated pink donut with rainbow sprinkles. “Samantha Moon likes to give me a hard time about my donuts.”

“I didn’t say anything, Detective,” I said, shrugging innocently.

“You didn’t have to...now, let’s cut the crap. Samantha, this is Detective Sanchez from the Los Angeles Police Department.”

He stood like a true gentleman, reached over and shook my hand with a firm but soft grip. His grip told me a lot: confident, warm, comfortable with himself. Most important: human.

I’d had my hand in my jeans pocket where I had been holding a hand warmer. Yes, a hand warmer. They sold them at the local market...and they did wonders for creatures like me. If I knew a handshake was imminent, I could pop one of these open, grip it in my pocket...and shake hands with confidence.

Sherbet asked me to have a seat, and I did, next to Sanchez.

Sanchez listened to this exchange and smiled. An easy smile. Friendly. But there was a strength to his jaw, and the way his forearms rippled as he moved slightly. He sported a thick, gold wedding ring. He said, “You were a federal agent, Ms. Moon?”

“Call me Samantha. And yes. For a few years.”

I nodded. I understood completely. I said, “I developed a...condition.”

“A condition that kept you from working as a federal agent?”

“No. A condition that kept me out of the sun. It’s called xeroderma pigmentosum and it’s a bitch.”

“I’m sorry to hear that. And here we dragged you out into the sun. My apologies.” Sanchez’s concern was real as he leaned forward and looked from me to Sherbet. “I hadn’t known. I would have met you at your home, or anywhere that you were more comfortable.”

I smiled at his sweetness. “It’s okay, Detective. I’ve learned to adapt.”

Truth was, six months ago, I’d adapted quite nicely, as I had then sported a medallion that enabled me to step out into the light of day. That the medallion had been buried under my skin was another story—or that a body-hopping demon had torn it from me...was, in the least, a horror story for another day, too.

Lots of stories, I thought.

I nodded to him as Sanchez said, “As long as you’re okay.”

Detective Sherbet looked at me for a long moment. Then he looked at Sanchez, who was looking down at his hands.

“Either someone starts talking about the case, or I’m going to start knocking heads,” I said.

That seemed to break the ice. Sanchez chuckled. Sherbet might have grinned. Finally, the handsome LAPD homicide detective said, “We think we have a serial killer on our hands.”

I had been called in on such a case last year. Sherbet and I eventually caught the bastards behind what had turned out to be a blood ring. Right, a blood ring. For vampires. Sherbet, of course, no longer had any memory of my involvement in the case, thanks to Detective Hanner, a fellow creature of the night who had been overseeing—and concealing—the bloody enterprise for many years. Thanks to her otherworldly ability to remove and replace memories, most of the department—and anyone involved in the case, for that matter—believed that only one man had been behind the killings. The fact that the bodies had been drained of all blood had never made it into police reports or autopsy reports. Any connections to vampires had been removed from documentation. Sherbet himself was remembering more and more of the case, thanks to my help. But much was forgotten and would, undoubtedly, remain forgotten.

Now, I looked at Sherbet and thought: How much did you tell him about me?

Sherbet held my gaze then finally looked away. Everything, Sam. Everything.