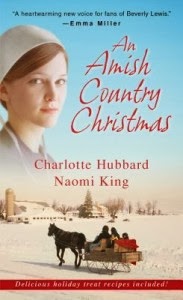 “The Christmas Visitors”: For spirited Martha Coblentz and her twin Mary, the snow has delivered the perfect holiday and birthday present to their door—handsome brothers Nate and Bram Kanagy. But when unforeseen trouble interrupts their season’s good cheer, it will take unexpected intervention—and sudden understanding—to give all four the blessing of a lifetime.
“Kissing the Bishop”: As the New Year’s first snow settles, Nazareth Hooley and her sister Jerusalem are given a heaven-sent chance to help newly widowed Tom Hostetler tend his home. But when her hope that she and Tom can build on the caring between them seems a dream forever out of reach, Nazareth discovers that faith and love can make any miracle possible.

I’ve called Missouri home for most of my life, and most folks don’t realize that several Old Older Amish and Mennonite communities make their home here, as well. The rolling pastureland, woods, and small towns along county highways make a wonderful setting for Plain populations—and for stories about them, too! While Jamesport, Missouri is the largest Old Order Amish settlement west of the Mississippi River, other communities have also found the affordable farm land ideal for raising crops, livestock, and running the small family-owned businesses that support their families.
Like my heroine, Miriam Lantz, of my Seasons of the Heart series, I love to feed people—to share my hearth and home. I bake bread and goodies and I love to try new recipes. I put up jars and jars of green beans, tomatoes, beets and other veggies every summer. All my adult life, I’ve been a deacon, a dedicated church musician and choir member, and we hosted a potluck group in our home for more than twenty years.
Like Abby Lambright, heroine of my Home at Cedar Creek series, I consider it a personal mission to be a listener and a peacemaker—to heal broken hearts and wounded souls. Faith and family, farming and frugality matter to me: like Abby, I sew and enjoy fabric arts—I made my wedding dress and the one Mom wore, too, when I married into an Iowa farm family more than thirty-five years ago! When I’m not writing, I crochet and sew, and I love to travel.
I recently moved to Minnesota when my husband got a wonderful new job, so now he and I and our border collie, Ramona, are exploring our new state and making new friends.

Her latest book is An Amish Country Christmas.
Visit her website at www.charlottehubbard.com.
Connect & Socialize with Charlotte!
FACEBOOK | GOODREADS

This is a bonus book with two in one. The first story is called The Christmas Visitors, and involves a set of twin Amish woman, Martha and Mary Coblentz, and a set of brothers Nate and Bram Kanagy. The couples have a chance meeting when the boys arrive in Cedar Creek to pick up their buggy and sleigh.
This is a tale, that will make you smile, with the antics that only twins can produce. Will there be budding romance here, but between whom? These young people belong to strong Amish families, who stand behind them.
Enjoy immersing yourself in these young folks lives, a different kind of Christmas.

The second book, with a really cute title, Kissing The Bishop, is just that. This is a continuation of the lives of the Hooley family. We first met Jerusalem and Nazareth when they arrived in Willow Ridge with their nephews.
Now one or both of the sisters appear to have new loves. Is it possible at their age. Tom Hosteler has an eye for Jerusalem, but his wife left him, and divorce is not allowed for the Amish. When several area Bishops arrive at Tom's place, they want him to become the new Bishop of his district. The Hooley sister's are there to help and cook for these gentlemen. One of the Bishops, Vernon Gingerich, a widower, likes what he sees in Nazareth.
We find these older folks out playing like children, so cute. You will love the sparking that goes on between these couples. Their paths also cross with the Kanagy and Coblentz couples.
This is a refreshing, enjoyable Holiday read. I really enjoyed it, and can't wait for the next book.
Also included is a plethora of wonderful recipes. Enjoy!!