Join Barbara A. Andrews, author of the historical fiction novel, The Sotweed Smuggler, as she tours the blogosphere September 9 - September 20 on her first Book Blast with Pump Up Your Book! Barbara will be giving away a $25 Amazon Gift Card to one lucky winner! To enter, fill out the Rafflecopter form on the participating blogs below and good luck! If you would like to host Barbara, please email Tracee at tgleichner (at) gmail.com. 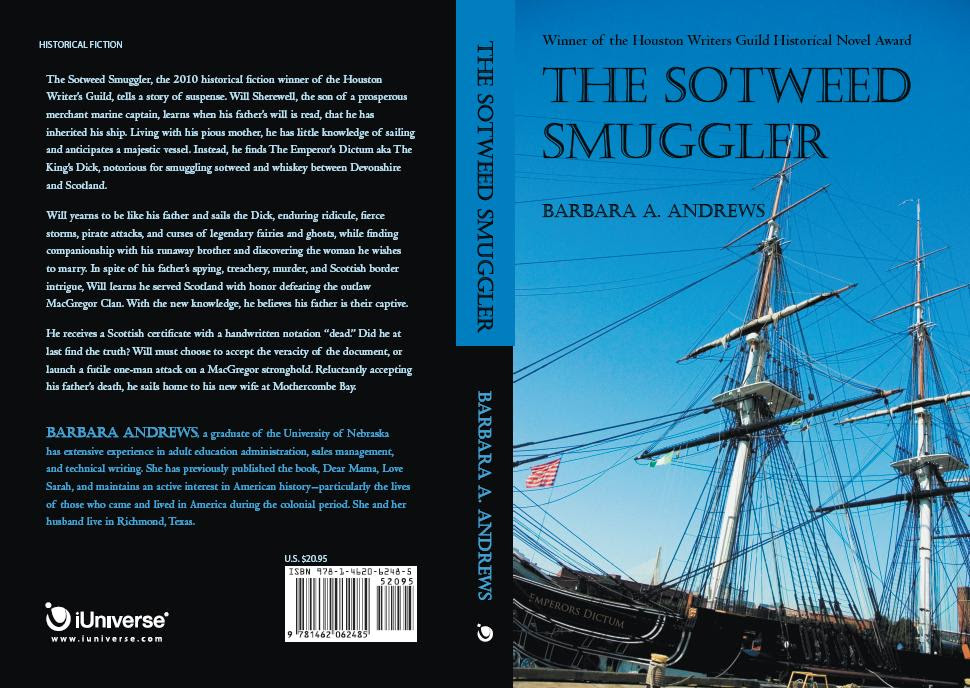 The Sotweed Smuggler, the 2010 historical fiction winner of the Houston Writer’s Guild, tells a story of suspense. Will Sherewell, the son of a prosperous merchant marine captain, learns when his father’s will is read, that he has inherited his ship. Living with his pious mother, he has little knowledge of sailing and anticipates a majestic vessel. Instead, he finds The Emperor’s Dictum aka The King’s Dick, notorious for smuggling sotweed and whiskey between Devonshire and Scotland. Will yearns to be like his father and sails the Dick, enduring ridicule, fierce storms, pirate attacks, and curses of legendary fairies and ghosts, while finding companionship with his runaway brother and discovering the woman he wishes to marry. In spite of his father’s spying, treachery, murder, and Scottish border intrigue, Will learns he served Scotland with honor defeating the outlaw MacGregor Clan. With the new knowledge, he believes his father is their captive. He receives a Scottish certificate with a handwritten notation “dead.” Did he at last find the truth? Will must choose to accept the veracity of the document, or launch a futile one-man attack on a MacGregor stronghold. Reluctantly accepting his father’s death, he sails home to his new wife at Mothercombe Bay.

Barbara Andrews, a graduate of the University of Nebraska has extensive experience in adult education administration, sales management, and technical writing. She has previously published the book, Dear Mama, Love Sarah, and maintains an active interest in American history--particularly the lives of those who came and lived in America during the colonial period. She and her husband live in Richmond, Texas.

Reading Through Life One Page At a Time

Confessions of a Reader

Queen of All She Reads