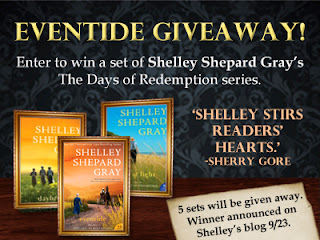 Welcome to the blog tour for the riveting conclusion to the Days of Redemption series, Eventide. In her latest novel, Shelley Shepard Gray reveals the power of love to illuminate even the darkest paths and how faith, family, and forgiveness can forge through any obstacle.
Shelley and her publisher are celebrating by giving away FIVE sets of the series.


Five winners will receive:
Enter today by clicking one of the icons below. But hurry, the giveaway ends on September 21st. All winners will be announced September 23rd at Shelley’s blog.

Don’t miss a moment of the fun; enter today and be sure to visit Shelley’s blog on the 23rd to see if you won one of the book sets! 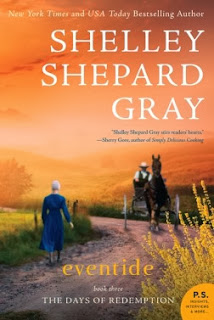 A young Amish woman harbors a difficult secret. Does she dare share the truth with the man she hopes to marry?
Elsie Keim doesn’t want to be left behind. Her twin sister, Viola, and her older brother, Roman, have both found love and are building lives of their own. But Elsie? She’s still stuck at home, being treated like a child. No one seems to consider her a capable woman—all they see are the thick lenses of her glasses, constant reminders that Elsie suffers from keratoconus and is slowly going blind.
Elsie knows there’s much more to her than her disease. That’s why when a new neighbor, Landon Troyer, shows some interest in her, she doesn’t want anything to scare him away . . . even if it means keeping her condition a secret.
Landon is ready to start a new life and feels like Elsie may just be the right woman to start it with. But when Roman steps in and shares the truth about Elsie’s illness, Landon is floored. His job is demanding and takes him away from home, sometimes for days at a time. How could he keep up with his responsibilities and take care of Elsie?
Purchase a copy here.
Learn more at Shelley’s website. 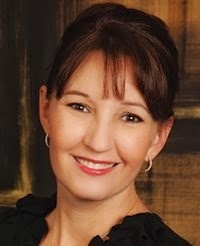 Shelley Shepard Gray is the New York Times and USA Today bestselling author of the “Sisters of the Heart”, “Seasons of Sugarcreek”, “Secrets of Crittenden County”, and Families of Honor series. She lives in southern Ohio, where she writes full-time, bakes too much, and can often be found walking her dachshunds on her town’s bike trail.
Find out more about Shelley at http://www.shelleyshepardgray.com

I really dislike this series to end. Have grown to love these characters, and I too, like the Author enjoy the Grandmother, Lovina. What a strong and loving person she is.
This book wraps up several stories in one. Elsie is coming to terms with impending blindness, but is there an answer to help her? When a new neighbor begins to help her brother Roman, she likes what she finds in Landon Troyer. With her handicap can their ever be a relationship?
Peter is finally embracing his problems, but when the book opens, his wife Marie is seriously ill. Changes are coming in the family. Soon Viola will be marrying and moving to Belize. Roman and Amanda have started a new life, but what about Elsie? How will she deal with her blindness?
Loved all of the stories! What a great amount of love goes around here. Such a great faith in God is shown, and a large amount of prayer goes into the life decisions. Enjoy this third book, I sure did, and want more.
We are also treated to a preview to Shelley Shepard Gray's new novella, Peace.