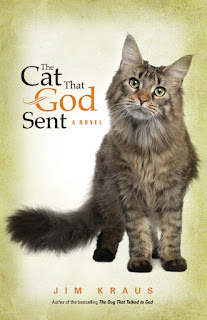 Meet Petey, your not-so-average cat—on a mission from God Disillusioned young pastor, Jake Wilkerson, has just arrived at his new assignment in the small rural church of Coudersport, Pennsylvania. Also new on the scene is Petey, a cat of unknown origins and breed—but of great perception. As Jake sets about doing the business of ministry, Petey’s continued interference brings chaos to the community of curiously off and eccentric people—residents like the faith-avoiding veterinarian Sally Grainger and Tassy, a young runaway with a secret. An expert at hiding his fears, Jake wonders if all this—and the cat to boot—is more than he can handle. What is Petey’s real “mission”? Perhaps something larger than Jake—or even Petey—can possibly know.


Be sure to check out Jim’s The Dog That Talked to God which was nominated as an ECPA book of the Year (2013).


Jim Kraus grew up in Western Pennsylvania and has spent the last twenty years as a vice president of a major Christian publishing house. He has written more than twenty books and novels, including the best-selling The Dog That Talked to God. He and his family live outside of Chicago with a sweet miniature Schnauzer and an ill-tempered Siberian cat named (of course) Petey.
www.jimkraus.com

When the new Pastor, Jake Wilkerson, arrives at his new rural church in Caudersport, PA, he finds a cat on his doorstop. The cat adopts Jake, and is soon named Petey. Is it a coincidence that the cat is there? I think not!
Jake comes with a secret...he has lost his faith. A Minister without faith?
When Petey arrives he seems to make it his mission to help Jake. He sure does!! You delight in some of the things that cat says, no he can't talk, but we can read it. At times he is hilarious!
We meet all the different people who attend the church, some appear gruff, and end up with hearts of angels. Of course, all want to meet and greet Petey. Now you think someone would be against having a cat in church...nope!
One thing for sure is Jake's taste in Woman sure could be better. Can he redeem himself? Or is history going to repeat itself?
One thing I didn't care for was that the ending appeared rushed, and there wasn't much epilogue. I felt the story needed more added at the end.

I received this book through Litfuse Publicity Blog Tours, and was not required to give a positive review.