Giveaway Happily Ever After Hop: The Maid of Fairbourne Hall by Julie Klassen 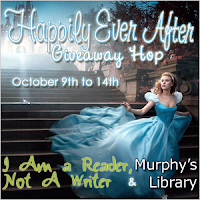 To escape a scheme to marry her off to a dishonorable man, Margaret Macy flees London disguised as a housemaid. If she can remain unwed until her next birthday, she will receive an inheritance, and with it, sweet independence. But she never planned on actually working as a servant. And certainly not in the home of Nathaniel and Lewis Upchurch--both former suitors.

As she fumbles through the first real work of her life, Margaret struggles to keep her identity secret when suspicions arise and prying eyes visit Fairbourne Hall. Can she avoid a trap meant to force her from hiding?

Brimming with romance and danger, The Maid of Fairbourne Hall takes readers inside the fascinating belowstairs world of a 19th-century English manor, where appearances can be deceiving.

Another GREAT book by Julie Klassen. I loved it!!
Talk about going from Rags to Riches Margaret Macy as Nora goes from Riches to Rags. What an eye opener for this young 24 year old woman. They live in England in 1815, and she is from Money! They have oodles of servants for everything. When she overhears her Step-Father encouraging his Nephew Marcus to get with it marry her, at all costs, even if he has to molest her and then save her face. She knows she has to get away, by chance their maid Joan is fired, for something she did, and she takes her to her sister's!
You will not believe that this pampered girl is able to do all that she accomplishes. Is she going to be able to last, or will she end up going home to having someone else dress her?
She ends up at the home of two of her former suitors, and you will have to wonder if one or neither of these men, Nathaniel or Lewis will end up with her. Don't miss this one, reminiscent of old England and some of its glory! I also love how Nate reinstated a prayer meeting for all of the help each morning. This is a great Christian Romance Story!

I received this book from the Publisher Bethany House, and was not required to give a positive review.