***Special thanks to Jill Twigg for sending me a review copy.***

With the encouragement of family and friends, Jill Twigg pursued her lifelong dream of becoming a Christian author into reality. She is the mother of four daughters and nina to five grandchildren. She resides in Houma, Louisiana with her husband. 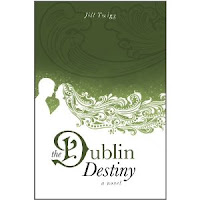 An ugly duckling story beginning with Rylee running for her life from Ireland to America. She marries a family friend Patrick, to stay hidden and while she is waiting for a chance to return to her homeland, she becomes a beautiful swan. A charming romance filled with intrigue, humor and fun weaved with a message of faith, trust and divine love that is sure to leave you yearning for more.


Prologue
The panting sounds she heard were getting stronger. Rylee looked behind her to see who was coming. There was no one. She quickly continued her quest to get home. Only a hundred more yards, she could make it. Still hearing panting sounds, she stopped and leaned against the building to confirm no one was coming. She didn’t understand. The sounds were so loud and persistent. She held her breath a second longer to take notice then sighed, realizing the sounds were coming from her own mouth. Rylee breathed a little easier knowing that possibly she wasn’t being followed just yet. In hurrying to get home to see her mother, Rylee knew one thing for sure: the need for calling bluffs had to stop. One day it wasn’t going to work. And she was thinking that it was the day. She was utterly unsure of her future now.
The flight plans were set, and she was to leave to catch the bus in a little less than an hour. That bus would take her to the airport in Dublin, which was at least an hour from her house. Rylee would then catch a plane and a connecting flight to her destination in America—Georgia, to be exact. Where that was? Rylee had no clue. She wasn’t sure of anything anymore. How can someone threaten the life of someone else and get away with it? Never mind that, how can one take the life of another and get away with it? Why was this happening to her? She hadn’t hurt anyone to deserve this warning.
Rylee certainly had her reasons for threatening to cause problems. So now she had to leave her home and her country. Where was the justice in that? With the deadline for her departure almost expired, she wasn’t wasting any time. Prolonging the inevitable only made the impending
matter worse. She knew she had to go. There was more at stake than just her life, and she wasn’t going to put her mother at risk because of her momentary inclination to stir up trouble.

Her mother was waiting with the luggage just inside the front door. A large tote bag consisting of a few changes of clothes, a toothbrush, and a license were all Rylee had to take on her journey. She was not sure why she bothered. That wasn’t much to start a new life, but she knew she’d get by with what she had. She received from her mother a quick kiss and one hundred dollars. They tried to stay strong, neither one wanting to show too much emotion, for fear they would not follow through with their plan. However, when the time drew near, their watering eyes displayed the melancholy they were both trying to avoid. They each had no indication as to when they would see each other again. Sometimes life was just so unfair. Hurrying back out the door, Rylee headed around the building to the bus stop and her uncertain

future. There was no bluffing her way out of this one.

I so enjoyed the Character of Rylee Shannon, she was like an ugly duckling. I can just picture Patrick and Lucy's first sight of her.
Patrick McLellan must really love his Mom, to really sacrifice himself to marry Rylee. Of course in his mind, there is an annulment to be had. He is also leaving town on his Church Mission, for seven months. So he really wasn't to worried about the marriage, he would be done with it when he returned.
Rylee has her demons and has not yet surrendered her life to Jesus. You will wonder what she is so afraid of to make her leave home in Ireland and travel to the US, and to all places Dublin, GA. She ends up there, because her Mom has been pen pals with Lucy for years, although they have never met. Lucy takes her friends daughter under her wing, and treats her like she is her own.
You will not be able to put this book down once you start your adventure. Be prepared to fall in love with the characters here, and you will want to know them all better. Rylee the ugly duckling touches so many lives, and they become real friends for her. You will hope by the end she and Patrick will end up together, but most of all that she will find her way to God.
at April 17, 2012