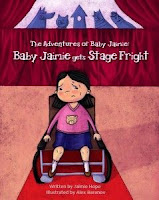 About The Adventures of Baby Jaimie

Baby Jaimie is in her first year of school. She has made a lot of friends and learned a lot of things. Now she will learn what it means to be a team player when she is in her very first play. Follow Baby Jaimie as she learns the lesson that there are no small parts, only small actors. 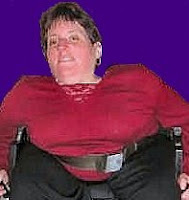 Jaimie Hope was born in New York. It wasn’t until high school that she decided she wanted to be a writer. This is when the ideas for the Adventures of Baby Jaimie started forming. This was also around the time she joined the newspaper staff. According to the author she was part of the staff for two years and really enjoyed it.

Moving to Florida, she became an active volunteer at the local library and the historical society. During this time, she also sang on a few demos at the local studio, wrote her first song, and ran a book club.
In June of 2010, Jaimie Hope became a two time PublishAmerica author with the release of her second novel, Bless the Broken Road. Her first novel was Who Says You Can’t Go Home in 2008. Her second children’s book, The Adventures of Baby Jaimie: Baby Jaimie Goes to School also available courtesy of CreateSpace published in the same year.

In 2011 three more books were published. An Autobiography, Roll with it, courtesy of PublishAmerica, and two direct to Kindle E-Books. The first one is the third installment of the Baby Jaimie series entitled, The Adventures of Baby Jaimie: Baby Jaimie Gets Stage Fright, and the other is my first Paranormal Romance, When You Come Back to Me Again. Both e-books are now available in book format courtesy of CreateSpace.

I read this book with my boys ages 5 and 6, and they seemed to enjoy the story. The youngest is in Kindergarten and could relate to the story. The kids learned along with Jaimie about putting on a play, and we talked about it. When the Children were trying to decide on which play they were going to do, my boys were rooting for Three Little Pigs. They were happy when I told them that was the one they decided to do.
They didn't like the way Jaimie's sister Kelly was treating her, and was glad that her Mom made her stop. They also didn't even notice that Jaimie was in a wheelchair, until I pointed it out. That brought on another discussion on treating people with disabilities nicely.
We discussed being afraid and trying to do our best. Really great examples to show and use with the children. I recommend this really good learning experience for children.

I received this book from author, and Pump Your Book, and was not required to give a positive review.
at April 03, 2012