Spring for Susannah by Catherine Richmond 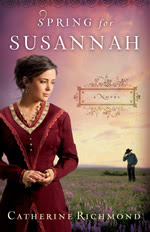 Booklist says, "Inspired by [folk] lyrics, Richmond arrives on the inspirational fiction scene with a moving debut novel. Readers will be filled with hope that Susannah will learn the true meaning of love. Highly recommended where inspiring, romantic historical fiction is in demand."

Hundreds of miles from home, Susannah faces an uncertain future as a mail-order bride on the untamed Dakota prairie.

When her parents die suddenly, and no suitors call, Susannah resigns herself to the only option available: becoming a mail-order bride. Agreeing to marry her pastor's brother, Jesse, Susannah leaves the only home she's ever known for the untamed frontier of the Dakota Territory .

Her new husband is more loving and patient with her than she believes she deserves. Still, there is also a wildness to him that mirrors the wilderness surrounding them. And Susannah finds herself constantly on edge. But Jesse's confidence in her-and his faith in God's perfect plan-slowly begin to chip away at the wall she hides behind.

When she miscarries in the brutal Dakota winter, Susannah's fledgling faith in herself and in God begins to crumble. Still, Jesse's love is unwavering. Just when it seems like winter will never end, Susannah finally sees the first tentative evidence of spring. And with it, the realization that more than the landscape has changed.

She looks to the future with a renewed heart. Yet in her wildest dreams, she couldn't predict all that awaits her. 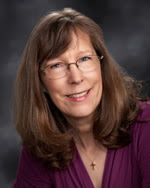 Catherine Richmond was focused on her career as an occupational therapist till a special song planted a story idea in her mind. That idea would ultimately become Spring for Susannah, her first novel. She is also a founder and moderator of Nebraska Novelist critique group and lives in Nebraska with her husband.

My Review: I couldn't put this book down. Felt like I had moved in with Susannah and Jesse. Even though this story takes place in the 1800's, before the Dakota's become States it seems so real...it could be happening today. Loved the frank discussions that went on, and how a Woman was supposed to be so prim and proper.
Susannah was brought up to be invisible by her Mother, and her Father [although he encouraged her Vet skills, he was not interested in any of her other accomplishments.]
Jesse was a member of a large family growing up, and is trying to put the Civil War behind him. He has moved to the Dakota prairie, and receives word from his brother [a Minister] of an available wife. So Susannah becomes a Mail Order Bride...kind of!
What a great Christian Man Jesse is and what a wonderful understanding, giving person he is. Love the interaction between him and Susannah...when the Elkhound jumps into their wagon and Chicken feathers fly. Jesse says "I guess we won't have to pluck the ones we are going to eat"...and Susannah's reply..."and I'll have to knit sweaters for the ones were keeping!!" Too cute!
This is a wonderful Christian romance story, I just wish there had been more!!

To celebrate her debut novel, Catherine and her publisher, Thomas Nelson, have teamed up to give away a Spring For Susannah

Prize Package worth over $150!

* Spring for Susannah by Catherine Richmond (for KINDLE)

To enter just click one of the icons below and then tell your friends! But hurry, giveaway ends on June 27th. Winner will be announced on Tuesday, June 28th at 5 PM (6PM MST, 7PM CST, & 8PM EST) during Catherine's Spring for Susannah Book Club Party on Facebook! Catherine is rustling up some fun for the party - she'll be chatting about the story behind her novel, hosting a book club chat, testing your mail-order bride trivia skills, and giving away some GREAT prizes! Don't miss the fun and tell your friends!