Count the Nights by Stars by Michelle Shocklee 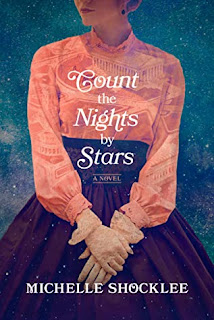 Count your nights by stars, not shadows. Count your life with smiles, not tears.
1961. After a longtime resident at Nashville’s historic Maxwell House Hotel suffers a debilitating stroke, Audrey Whitfield is tasked with cleaning out the reclusive woman’s room. There, she discovers an elaborate scrapbook filled with memorabilia from the Tennessee Centennial Exposition. Love notes on the backs of unmailed postcards inside capture Audrey’s imagination with hints of a forbidden romance . . . and troubling revelations about the disappearance of young women at the exposition. Audrey enlists the help of a handsome hotel guest as she tracks down clues and information about the mysterious “Peaches” and her regrets over one fateful day, nearly sixty-five years earlier.

1897. Outspoken and forward-thinking Priscilla Nichols isn’t willing to settle for just any man. She’s still holding out hope for love when she meets Luca Moretti on the eve of the Tennessee Centennial Exposition. Charmed by the Italian immigrant’s boldness, Priscilla spends time exploring the wonderous sights of the expo with Luca—until a darkness overshadows the monthslong event. Haunted by a terrible truth, Priscilla and Luca are sent down separate paths as the night’s stars fade into dawn. 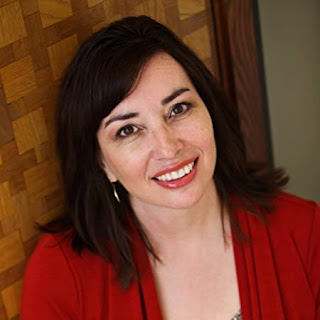 Michelle Shocklee is the author of several historical novels, including UNDER THE TULIP TREE, a Christy Awards & Selah Awards finalist. As a woman of mixed heritage--her father's family is Hispanic and her mother's roots go back to Germany--she has always celebrated diversity and feels it's important to see the world through the eyes of one another. Learning from the past and changing the future is why she writes historical fiction.

UNDER THE TULIP TREE is set in 1930s & 1860s Nashville and tells a story of unlikely friendship, reconciliation, and forgiveness. Based on extensive research into the Federal Writers' Project Slave Narratives of 1936, as well as the writings of Frederick Douglass and others, many scenes in UNDER THE TULIP TREE are taken directly from the pages of history. Library Journal gave UNDER THE TULIP TREE a starred review.

With both her sons grown, she and her husband now make their home in Tennessee, not far from the historical sites she writes about in her new book COUNT THE NIGHTS BY STARS, a time-slip story set during the 1897 Tennessee Centennial Exposition.

Michelle loves hearing from readers! Connect with her at www.MichelleShocklee.com

When I hear Maxwell House, my mind immediately thinks coffee! A timeline read between 1897 to 1961 centered in Nashville Tennessee at the Historic Maxwell House.

This is a beautifully crafted Christian read, that will quickly have you page turning! We get to attend the Tennessee Centennial Exposition with the gift of a scrap book, and through this we follow the lives of two strong women.

We are given some sweet romance, a look at those whom were born with the silver spoon, and also a dark side of human trafficking, along with a past meeting present in this great book!

I received this book through Net Galley and the Publisher Thomas Nelson, and was not required to give a positive review.
at March 22, 2022