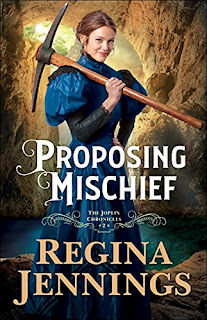 Only one person can give her the freedom she seeks--but is it worth the risk?

Maisie Kentworth is being forced to stay on her parents' ranch. After a short-lived relationship with the wrong man, she's worried about inflaming things further between her former beau and her protective family. Left to rue her mistakes, she keeps busy exploring the idle mine at the edge of their property, where she discovers a great treasure.

Boone Bragg is also stuck. With his parents on vacation, the management of Bragg Mining falls on him, and one of his advisors wants him as a son-in-law. One wrong move, and Boone will end up either offending an associate or marrying a woman he can't endure.

While closing up a spent mine, Boone gets two surprises. One is a spitfire farm girl who's trespassing with a pickax, and the other is the amazing crystal cavern that she's discovered. Suddenly Boone sees a way to overhaul the family business. With part of the cavern on Kentworth land, Boone makes Maisie a proposal that he hopes will solve all of their problems. Instead it throws Joplin into chaos, and it will take all of Maisie's gumption to set things right.

Regina Jennings is the winner of the National Reader's Choice Award and a finalist for the Christy Award, the Golden Quill and the Oklahoma Book of the Year Award. A graduate of Oklahoma Baptist University with a degree in English and a minor in history, Regina has worked at the Mustang News and at First Baptist Church of Mustang, along with time at the Oklahoma National Stockyards and various livestock shows. She lives outside of Oklahoma City with her husband and four children when not traveling the world.

I really enjoyed this read, and yes, it is part of a series, but this can be read alone!

This is Maisie Kentworth's story, a girl who is not afraid to get her hands dirty, and it is also Boone Bragg's story, a man who comes from money, but is trying to establish his own fortune in the mines. Boone is also being pursued by all the local socialites, and is not interested. You are about to find the twist that happens in this delightful story!

We are also gifted, through the words of the author, of a beautiful crystal cave, and how it is found!

The antics between Maisie and Boon are delightful, "that's one", and made me want more!

There is some evil lurking here, and we are there as things unfold!

This is a read that will have you page turning, and in the end wanting more!

I received this book through Net Galley and the Publisher Bethany House, I was not required to give a positive review.
at December 07, 2021