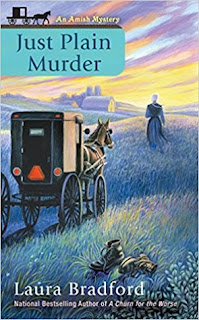 Claire Weatherly loves her charming adopted hometown but is shocked when the murder of a former town dignitary proves that evil can hide in plain sight in this all new Amish mystery in the national bestselling series.

Jakob and Claire have been enjoying spending more time together in lovely Heavenly, PA. With Claire's help, the detective is making slow progress reconnecting with members of his Amish family who shunned him when he left to pursue a career in law enforcement. Jakob's mentor, Russ Granger, the long retired police chief who inspired him to become a cop is back in town. Claire's always wanted to meet the man who changed the course of Jakob's life. But not long after he arrives in Heavenly, Russ is murdered.

Jakob is shocked and can only imagine that his old friend must have been killed by someone outside of the Amish community. Claire and Jakob soon find that things are not as they seem and Jakob's old boss may have stumbled into something sinister before he was killed. The answers they uncover are closer to home and more shocking than they ever expected. 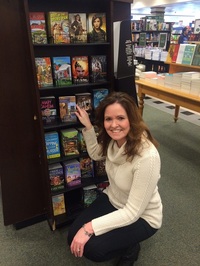 While spending a rainy afternoon at a friend's house nearly forty years ago, Laura Bradford fell in love with writing over a stack of blank paper, a box of crayons, and a freshly sharpened number two pencil.

Those early attempts at the craft had her writing and illustrating stories for young children. Wise beyond her years, Laura saved her first writing attempt in a hand decorated shoe box (complete with sparkly stickers) and moved on to her next idea. Her second book—O’Casey’s Wish—was so utterly brilliant, she sent it off to a well-known New York publishing house at the tender age of ten, confident she was on the verge of becoming the next Don Freeman (Corduroy) or Shel Silverstein (Giving Tree).

While she wasn’t of the mindset to save that first crushing blow for posterity, Laura did save the original copy of this particular literary masterpiece in the event the letter was a mistake.

Desperate to prove her flexibility as a writer, Laura soon found herself dabbling in jokes (for her Girl Scout troop’s newsletter), stories of angst (a somewhat autobiographical look at her teenage years), movie reviews (for the Xavier University Newswire), and countless news and feature articles (for newspapers in CT, SC, TN, and MO).

It wasn’t until Laura was home raising children of her own though, that she was finally able to dust off that rainy day dream and bring it back to its original form—writing fiction. Today, she is a bestselling mystery author with Berkley Prime Crime (Penguin Publishing), and an award winning romance author with Harlequin American. She lives in New York with her family.

Oh, and if you meet Laura at a book event in the future, ask her about O’Casey’s Wish. It tends to travel with her everywhere she goes.

Now as you see the title of this book it is the sixth in a series, but the first that I have read, and it didn’t take much to be caught up and involved in the lives of these English and Amish in Heavenly.
The author offers us a story with a bit of romance, family love and comradery, with a glimpse into Amish life, and unfortunately a murder.
Right to the end of the book you really don’t know how things are going to turn out, and I never saw the ending coming.
Now I want more, I want to move on with Claire and Jakob, and more of Diane and Bill, and now I am looking forward to another read in this series!

I received this book through First Reads, and was not required to give a positive review.
at November 28, 2018