I Am A Reader, Not A Writer Presents: Whitcomb Springs Blast

“WHITCOMB SPRINGS” BY MK MCCLINTOCK
In the spring of 1865, a letter arrives in Whitcomb Springs for Evelyn Whitcomb. The Civil War has ended and the whereabouts of her husband is unknown, but she doesn’t give up hope. With courage, the help of a friend, and the love of a people, Evelyn finds a way to face—and endure—the unexpected.
“Whitcomb Springs” is the introductory, stand-alone short story of the Whitcomb Springs series set in post-Civil War Montana. 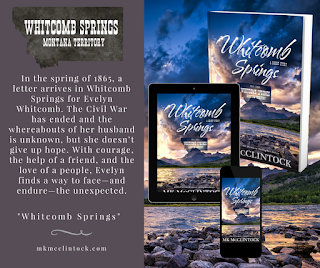 
The letter fluttered to the table. Evelyn stared at the sheet of paper but could no longer make out the words as they blurred together. Surrender. She prayed this day would come, they all had, and after four tortuous years, the war was finally over.
There would be more capitulation on the part of the South, and too many families who would never see their men again . . . but it was over.
Separated, yet not untouched, from conflict, Evelyn Whitcomb lived in the same town her husband and their two friends founded one year before news of the Civil War reached them. By way of her sister, who lived in Rose Valley, Pennsylvania with their parents, they were kept informed as often as Abigail could get a letter through. Evelyn often wondered if she should have returned to Rose Valley to help with the war effort, much as her sister Abigail had done, yet she found the needs of Whitcomb Springs to be vast as the town continued to grow.
Many men and boys left, leaving their wives, mothers, and sisters behind to fight for a cause they didn’t fully understand, yet still felt it their duty to serve. Others remained behind to continue working in the mine and watch over those families with or without kin.
Evelyn read over Abigail’s letter once more, letting the words settle into her mind, for even now she struggled to believe it was over—that her husband might return home.
Dearest Evelyn,
For too many years now I have shared with you the horrors and travesties befallen many of the young men with whom we spent our childhood. News has reached us that on the ninth of April, Robert E. Lee surrendered to Ulysses S. Grant at Appomattox Courthouse. Oh, sister, I dared not believe it was true when Papa brought home the news. He tells us not to become overly excited for there will surely be a few more battles waged until the news reaches both sides, but we can thank God that this war is officially over.
Your news of Daniel’s disappearance has weighed heavy on my mind these past months since we heard, and Papa has attempted to learn of his whereabouts, to no avail. We have not given up! There is much confusion right now on both sides and Papa said it could be weeks or months more before the men return home. Do not lose faith, sweet Evie.
Your most loving sister,
Abigail

Author MK McClintock
MK MCCLINTOCK is an award-winning author of historical romance and westerns, who has written several books and short stories, including the popular “Montana Gallagher” series, the “Crooked Creek” series, and the “British Agent” series. She continues the search for a time machine that can transport her to nineteenth-century Montana or Scotland—either works. MK enjoys a quiet life in the Rocky Mountains where she spins tales of romance, adventure, and mystery set in bygone times.

“HEALING FIRE” BY SAMANTHA ST. CLAIRE
After the death of Nora Hewitt’s husband, the citizens of Whitcomb Springs didn’t see odds favoring the young widow for holding onto the ranch with only her ten-year-old son to assist. That changes when a gentle giant of a man offers a helping hand.
Motivated by compassion and his own grieving heart, the blacksmith becomes a mentor for the troubled boy and befriends the attractive widow, scandalizing the town gossips. Propriety is wielded like a weapon to separate them, but Providence makes its own plans through fire, loss and redemption.

Excerpt from “Healing Fire”
Sawdust floated into drifts beneath the workbench, swirling in the cold Montana morning air. His breath a thin fog, Dominik Andris sang to himself as he ran his palm down the length of the cedar plank. Deep and resonant, the Austrian’s voice might have suited his appearance had it not been for its soft timbre. Broad-shouldered, square-jawed, and generally solemn in bearing, most people avoided him except when his skills as a blacksmith or undertaker were required.
Today, someone had need of him as the latter. A rectangular box stood propped against the back wall. Nearly complete, the box lid before him was carved in designs more suitable for a cradle. Dominik picked up a carving knife, dwarfed in his hands, and bent to correct a curve on the delicate vine tracing its way from one end of the lid to the other. He ran his fingers along its length, testing for burrs in the grain. His humming ceased and a line formed between his brows, a frown not directed to his work but to the reason for it.
As he straightened, he rubbed at the back of his neck and a little groan escaped his lips. He took a sip of cold coffee before crossing the workshop to the back wall where he picked up the box in one hand. The weight of it or the absence of weight, struck a painful chord. Just four feet in length, it was enough. Enough to hold the body of the child, the woman’s child.

Author Samantha St. Claire
SAMANTHA ST. CLAIRE was born in 2016, the alter-ego and pen name of an author of historical fiction born a few decades earlier. She may have found her niche in western historical fiction, served up sweet. Never faint of heart, her signature protagonists face the hazards of the frontier with courage, wit, and a healthy pinch of humor.

Welcome to Whitcomb Springs! This is a collection of short stories, and the occasional novella, written by multiple authors. The series is filled with stories of adventure, danger, romance, and hope, and is set in the fictional town of Whitcomb Springs, Montana Territory. The stories span the years of 1865-1885. Although each story may be set during a different time, they are stand-alone and may be read in any order. While the first stories will publish on March 15, 2018, this is an on-going project, so new stories may be published at any time by one of the participating authors.
For a complete listing of all currently available and upcoming Whitcomb Springs stories, visit http://www.mkmcclintock.com/whitcomb-springs-series.


Open only to those who can legally enter, receive and use an Amazon.com Gift Code or Paypal Cash. Winning Entry will be verified prior to prize being awarded. No purchase necessary. You must be 18 or older to enter or have your parent enter for you. The winner will be chosen by rafflecopter and announced here as well as emailed and will have 48 hours to respond or a new winner will be chosen. This giveaway is in no way associated with Facebook, Twitter, Rafflecopter or any other entity unless otherwise specified. The number of eligible entries received determines the odds of winning. Giveaway was organized by Kathy from I Am A Reader and sponsored by the author. VOID WHERE PROHIBITED BY LAW. a Rafflecopter giveaway
at March 15, 2018