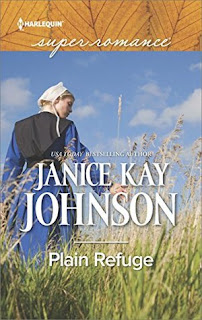 He's her only defense…and a frightening temptation

Rebecca Holt thinks she's doing the right thing when she takes evidence proving her ex-husband is hiding a murder. But after two attempts on her life, she flees with her six-year-old son to rural Missouri, where the pair hide among Amish relatives, dressing "plain."

County sheriff Daniel Byler was raised Amish, but his protective instincts put him in conflict with his family's beliefs at an early age and he left the faith. Yet this background helps him to recognize Rebecca as someone who is out of place, in danger…and lying to him. 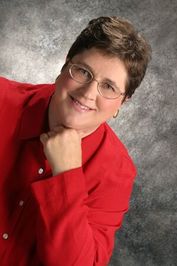 Janice Kay Johnson is the author of sixty books for children and adults. Her first four published romance novels were coauthored with her mother, also a writer who has since published mysteries and children's books on her own. These were "sweet" romance novels, the author hastens to add; she isn't sure they'd have felt comfortable coauthoring passionate love scenes!

Janice graduated from Whitman College with a B.A. in history and then received a master's degree in library science from the University of Washington. She was a branch librarian for a public library system until she began selling her own writing.

She has written six novels for young adults and one picture book for the read-aloud crowd. Rosamund was the outgrowth of all those hours spent reading to her own daughters, and of her passion for growing old roses. Two more of her favorite books were historical novels she wrote for Tor/Forge. The research was pure indulgence for someone who set out intending to be a historian!

Janice is divorced and has raised her two daughters in a small, rural town north of Seattle, Washington. She's an active volunteer and board member for Purrfect Pals, a no-kill cat shelter, and foster kittens often enliven a household that already includes a few more cats than she wants to admit to!

Janice loves writing books about both love and family — about the way generations connect and the power our earliest experiences have on us throughout life. Her Superromance novels are frequent finalists for Romance Writers of America RITA® awards.

With this story we are transplanted from San Francisco to the back hills of Missouri, from a hustle and bustle city to a plain and quiet way of life in Missouri.
This is a mystery that starts on page one and doesn’t end basically until the last page is turned. What a surprise you are in store for how the evil is captured, I loved it, and so unexpected.
We have a woman on the run, basically for her life, and she is traveling with her darling six-year-old son. Now I could see why her ex husband was trying to find his son, but that wasn’t all he wanted, and we find ourselves cringing at the brutality of what they are capable of doing in the name of greed.
Two people are thrown together, one the ex wife and the other the former Amish sheriff, and their chance meeting is about to change their lives forever. I loved how the Amish community rallies around our hiding mom and child, and how the six year old is protected and welcomed into their fold.
I see it as a mistake that Rebecca makes when she takes things that don’t belong to her, but don’t think she ever realized how much jeopardy she put her and her son’s life in, and in the end even more lives are in peril.
With the abundance of food, and mostly pie, there is a bit of romance, and then there is a lot of hiding that goes on here. A very different type of Amish story.
I received this book through Net Galley and Harlequin Superromance and was not required to give a positive review.