Into the Dark (First Force Book 3) by Cindy McDonald 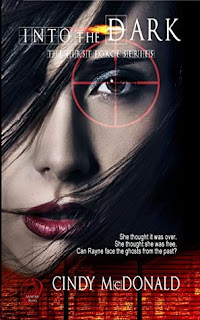 Four years ago Dr. Rayne Lee lost her husband and her four-year old daughter, Sierra, to a group of hostile guerrillas in the Amazonian Valley of Peru. It had taken every bit of her constitution to rebuild her life and to join her uncle's international security team, First Force, as the team's head medic. She still desperately missed her husband and her daughter, but all in all everything was back on track--until the phone calls started.

A young girl was calling claiming to be Sierra. The tiny trembling voice said that the guerrillas were holding her captive, and there was only one way for them to be reunited--Rayne must travel to Peru and give them something that she has. Moreover, they had another stipulation: She must come alone.

Suddenly the ghosts from Rayne's past are chasing her down a dark road.

What could they possibly want from her?
Could she return to the place where her family was
murdered and she was brutalized for seven horrid
months?
Was it really Sierra calling?

Rayne knew that she had to take the risk--she had to find out!

For twenty-six years Cindy’s life whirled around a song and a dance. She was a professional dancer/choreographer for most of her adult life and never gave much thought to a writing career until 2005. She often notes: Don’t ask me what happened, but suddenly I felt drawn to my computer to write about things that I have experienced with my husband’s Thoroughbreds and happenings at the racetrack—she muses: they are greatly exaggerated upon of course—I’ve never been murdered. Viola! Cindy’s first book series, Unbridled, was born. Currently there are five books in the series.
Cindy is a huge fan of romantic suspense series’, especially with a military ops theme. Although she isn’t one to make New Year’s resolutions, on New Year’s Day 2013 she made a commitment to write one. At this time, there are three books in her black ops series, First Force: Into the Crossfire, To the Breaking Pointe and Into the Dark. Book #4, To the Brink, is scheduled to release in September of 2016.
People are always asking Cindy: Do you miss dance? With a bitter sweet smile on her lips she tells them: Sometimes I do. I miss my students. I miss choreographing musicals, but I love writing my books, and I love sharing them with my readers.
Cindy resides on her forty-five acre Thoroughbred farm with her husband, Bill, and her Cocker Spaniel, Allister, near Pittsburgh, Pennsylvania.
My Review

Into the dark really explains Dr. Rayne’s life up to this point, she has lost her husband, a humanitarian doctor, and her only child to the drug cartel in Peru.
Her Uncle is a member of international security team that rescued her, and she is now living in the family mansion. Another member of the team has an apartment here also, Jack and his preconscious kindergartener daughter, just what is helping pull Rayne back, and make a purpose for her life.
Can you imagine how you would feel when you received a call from your dead child? She saw her daughter killed, but did she miss something, she has to go back to Peru and rescue her. Of course, Jack is having feeling for Rayne and doesn’t want her to go, but then the team all gets on board.
Will Rayne find her beloved daughter; will she even get out alive? This book has it all, including corruption in our own Government, and we find out who is behind a lot of ugly dealings.
There is a lot of sex in this book, which is totally unnecessary, in my opinion; the book has a lot going for it, and a great believable story line. Pick this one up and you won’t be able to put it down.
I received this book through Pump Up Your Book Virtual Book Tours, and was not required to give a positive review.