Then No One Can Have Her by Caitlin Rother 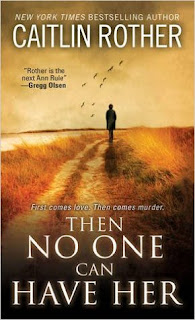 She thought she had married her soulmate. But when Carol Kennedy could no longer tolerate her husband's reckless womanizing and out-of-control spending, the artist, therapist and mother of two had to let him go. Just weeks after their divorce, Carol was found in her Arizona ranch home--bludgeoned to death with a golf club. Her ex, Steven DeMocker, was the prime suspect. Yet it took the authorities months to arrest him--and years to convict. . .

Packed with twists and turns, this powerful real-life account reveals every bizarre detail of this compelling case. Bestselling author and award-winning journalist Caitlin Rother presents an unforgettable story of love turned to obsession, and a family torn apart forever.

I’ve just finished reading Then No One Can Have Her , and as I have read Caitlin Rother’s books before, and loved them, this one did not disappoint, except that Carol died.
What a long journey for justice in this case, and the author has documented so well, that you feel your living with these people on a daily basis. When you see pictures of this couple, you see what looks like a loving solid unit, and they called each other their soul mates. What you can’t see is Steven DeMocker sexual addiction and his multiple affairs, sometimes more than one woman at a time.
We look at this story through Caitlin’s eyes and all the research and hours of investigation she put to pull out all of the facts. We feel Steven’s daughter’s pain at what has happened to their mother, and then what their father asks of them. How do you deal with the fact that your father is accused of murdering your mother? Breaks my heart.
Wait until you see the lengths Steven goes to implicate another person, including putting his daughter in legal trouble, possible jail time. To say he is a “Me” person is putting it bluntly; he uses everyone, including his family, which included his parents. His retired father even had to go back to work to help pay his mounting legal fees.
Has justice been served, lets hope so, nothing will ever bring Carol back, and maybe he is satisfied with that, as the book title points out. We will never know what makes a person act like Steven does, but at least he is behind bars.
I received this book from the Author, and was not required to give a positive review.