Days Of Future Past by Sally Smith O'Rourke 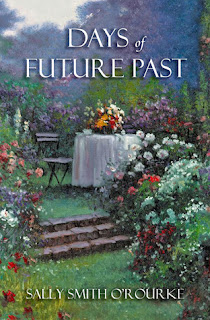 “It is by no means an irrational fancy that, in a future existence, we shall look upon what we think of as our present existence, as a dream." Edgar Allan Poe


Fate sometimes conspires to right a decades-old wrong. And the 6.8 earthquake that strikes Southern California one warm March night is the fateful event that brings family therapist Ann Hart and trauma specialist Ted McConaughy back together.
In search of her cell phone after the tremor, Ann picks up a shard of vintage cut glass from a collection she and her husband gathered during the four years of their marriage. For the millionth time she thinks about the day six years ago when he disappeared on a search and rescue mission in the Sierra foothills. Sitting atop the shattered crystal, a small silver cigar lighter glistens in the beam of her flashlight. Gently she returns the Victorian piece to the shelf. What does it mean that something she and Ted, her ex-fiancé, bought together survived when Alex’s beautiful glass is smashed to dust? Ann tells herself that it doesn’t mean anything more than glass breaks and silver doesn’t.


Sara Jane McConaughy has never experienced a strong earthquake, and as her father comforts his 16-year-old daughter, his mind is flooded with memories of the Northridge quake in 1994. He was living with his fiancée, his ex-fiancée, and even after all these years he doesn’t know what caused the split, but he always loved her. And he’d been sure she loved him.


Volunteering with the American Red Cross in the aftermath of the earthquake brings Ann and Ted face-to-face for the first time since their break-up, twenty years ago. Angry, flustered, excited, and bewildered by Ted’s sudden appearance and unusual behavior while she’s teaching a small group of people relaxing exercises, Ann demands he leave. Just as excited and bewildered, Ted rushes away. His exit leaves both of them wondering about … everything.


The earthquake (or is it seeing Ann?) ignites a series of recurring dreams peopled by total strangers in places Ted has never been. Accompanied by short lapses of time and sleepwalking, the dreams take a heavy toll on his waking hours. Sara Jane’s concern sends Ted on a quest to discover the cause and find a cure. When all medical possibilities are exhausted, he turns to a colleague, whose diagnosis leaves Ted more baffled than ever. Tom Alderman believes that the dreams are memories of past lives. The lives live in his subconscious, and the cure is hypnotherapy.


After several months of suffering with these increasingly emotional recurring dreams, Ted turns to Ann for help. One of Ann’s specialties is hypnotherapy and since he must be able to trust the hypnotist, Ann is his only salvation. Ann’s agreement to try and help (at the urging of a mutual friend) sends her carefully regimented and calm life into complete turmoil.
The garden gate they pass through together sends them on a journey that defies time and reason, forcing them to rethink their past, present, and future. Now, each must reconsider their capacity for love and forgiveness.


Things are not always what they seem.

Sally Smith O’Rourke, a native Californian, lives in a small Victorian village in southern California. She is the author of the much acclaimed Yours Affectionately, Jane Austen, her first solo novel. She is also co-author with her late husband Michael O’Rourke (aka F. M. O’Rourke) of The Man Who Loved Jane Austen (Kensington Books, 2006), The Maidenstone Lighthouse (Kensington Books, 2007), and Christmas at Sea Pines Cottage (Kensington Books, 2009).
Previously, Sally worked on network television, feature films, and documentaries in science, medicine, and aviation. She owned and operated a medical advertising company with her late husband where they produced and wrote teaching films for major medical and surgical manufacturing companies. Additionally, they collaborated on two feature films (direct to video).
In addition to writing every day, she works as a surgical scrub nurse and enjoys sewing, cooking, baking, candy making, cake decorating, and spending time with nieces, nephews, step-children, and grandchildren.

Ann Hart is so happy and so in love with her husband Alex as the book opens, and then the unthinkable and the world she has collapses. At the same time an old love Ted has been living a nightmare, literally almost every night, and having out of body experiences.
While I enjoyed this story and read it as rather a fairy tale, there are some who believe in reincarnation, which I do not. This story is based on multiple lives inhabiting Ted’s body, one is a sadist and the other is a heartbroken man who looses his wife on the voyage from Scotland to Antiqua.
This is what puts Ted back into Ann’s life, they are both Doctors she a family specialist and he a trauma specialist and they were previously engaged
I really loved Ted’s spunky and smart teenage daughter Sara Jane, she sure has a lot of insight and good advice. I liked this rather fantasy read, and brings to light a lot of what went on in the beginnings of this Country.
I received this book through I Am A Reader, Not A Writer Blog Tour, and was not required to give a positive review.