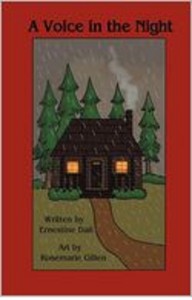 Title of Book: A Voice in the Night
Genre: Children’s Mystery
Book Length: 46 pp.
Author: Ernestine Dail
Website: www.bookstop.wix.com/children-books
Publisher: Avid Readers Publishing
PURCHASE A VOICE IN THE NIGHT AT AMAZON
SUMMARY:
Brian, Josh, and Thomas arrived at Blackstone Cabin with great expectations of fishing and having fun. Now in the midst of a raging storm, and a hooded stranger frantically knocking at their door, the boys desperately wished for Josh’s father, Mr.Joplin, to return to the cabin. Will he return in time to save the boys from danger, or will the boys open the door to the frantic knocking of the hooded stranger outside.
FIRST CHAPTER:

BLACKSTONE CABIN
Dark, rainy and ominous was the night.  The mountain wind whistled ferociously through the trees and around the cabin shaking its rugged doors. Lightning cracked the sky and thunder rolled over the mountain peaks resounding in an echo of authority. Brian, sleeping on the sofa, suddenly sat up gasping as the torrential rain splashed and pounded against the cabin windows. Shaking and trembling, he sprang from the sofa, ran to check the windows and the doors to make sure they were locked. Gingerly moving about the room, he noticed that the fire in the fireplace smoldered as the cold, dark stillness in the room beckoned him to put more logs on the fire. Carefully, he moved about in the dark, thinking about his friends, Josh and Thomas, sleeping upstairs in the loft. He wished that they were awake so that he wouldn’t be up alone, but the eerie, foreboding silence upstairs reminded him that they were still asleep, unaware of the storm. Slowly, he found his way to the wood bin in the corner of the room and placed a few logs on the fire, hoping that they would last until morning.
Standing by the fireplace, he remembered when he first met Thomas Templeton in school. He was tall and muscular, with cropped black hair and forlorn, hazel eyes.  Being six feet tall, he hovered above others in his class.  His appearance was always meticulous even though he didn’t wear the latest fashion. He rarely smiled and sometimes appeared to be very irate, but never mentioned what bothered him.  Frequently he turned his homework in late, if at all. While in class, he consistently made comments that were not relevant to the lesson.  Quite often, he bullied his classmates, took lunch money from the younger children, and never had anything positive to say about anyone.   Discounting his own lack of integrity and wrongdoing, he blamed everyone else instead of taking responsibility for his own actions. On one occasion, he was suspended from school for a few days because of his behavior. Brian often wondered why Thomas’ parents never attended any school activities, but Thomas never talked about them except to say that his parents were unemployed and that he worked part time after school to help pay the bills at home. He never spoke of having any siblings and sometimes it appeared that his immediate family did not exist. Furthermore, Thomas had no friends so Brian asked him if there was anything that he could do to help his family. At that instant, Thomas’ demeanor changed and Brian saw a glimpse of hope in his eyes. From that day on they became friends, and were friends for two years right up to the night of the incident at Blackstone Cabin.
On the other hand, his friend Josh had great aspirations for life. He loved school, loved to study and excel, and was very adventurous. He was always interested in competition that boosted his learning. After high school, his goal was to attend college and become a heart surgeon. At five feet, eight inches, he ran track at school, was an active swimmer, and went camping every year. His parents, Jennifer and Jerald Joplin, were always involved in PTA meetings, attended church, and were very active in Josh’s life as well as in the community. As a family, according to Josh, they always ate meals together every day at home, took trips together, and attended all activities in which Josh was involved. Josh was always encouraged to excel, so he studied hard and put forth his best effort in everything he did. Brian and Josh had often camped together for years, but this was the first time Thomas had agreed to join them. Asked on several occasions to go camping, he always refused and made excuses for not going.  Moreover, Brian thought about how Josh’s parents reminded him of his own. They were very supportive just as Brenda and Bobby supported him.
Brenda and Bobby Bradshaw taught Brian to treat people with dignity and worth; therefore, he befriended Thomas hoping to encourage him to make some right choices in life. Not only did Brian’s parents teach him to do what was right, but they lived the life that they taught.  Every year Brian watched his parents donate clothing to those in need at the shelter. Once a month they spent time at the shelter feeding the hungry. On every occasion, they attended school functions, took Brian on vacations, and spent qualitative time with him. They were great role models for him and were pleased that Brian tried to help Thomas, but also admonished Brian, “Remember who you are.” Eventually, he hoped that his life would be a testimony to Thomas as well. However, a change in Thomas’ behavior was not to happen right away.  Suddenly, crackling embers from the fire interrupted Brian’s thoughts.  He spun around and glanced toward the door. Unknowingly, he was not aware of the danger that lurked outside.
Flames from the fire flickered, casting dancing shadows against the wall. Brian suddenly realized that he had been standing by the fire for a long time and that he had to get some sleep. It was now 3:00 in the morning. Silently, he crept back to the sofa and tried to fall asleep again when he heard loud banging on the door and someone screaming, “Open the door!” “Open the door, now!”

Ernestine DaiI is a high school teacher and lives in Maryland. She has taught school for several years and enjoys the wonders and amazement she finds in being around children. The inspiration for writing her book comes from being surrounded with children and knowing their joys, likes, and dislikes. She is the author of two books—Dimples Do Good, and her latest, A Voice in the Night. She likes to read, write, travel and do crossword puzzles.


A Voice In The Dark is a read for young teens. It takes a look at having a bad reputation, can lead to further mistrust and accusations. Even when your innocent.
We have a young man named Brian who has what we would all want, the love of parents, faith, and a wonderful home life. Then we have Thomas, his home life has not been wonderful, actually, it has made him act up most of his life. His reputation is not a good one, and he has had some problems with the law.
Brian has befriended Thomas, has he made a mistake? You will need to read this very short story to find out, just how much trouble our actions can bring us. Will Brian be sorry he ever even knew Thomas, or will things work out.
The book only has 32 pages, and needs a bit more meat in it to keep your attention, there is a lot of potential here.

I received this book through Pump Your Book Tours, and was not required to give a positive review.