***Special thanks to Cathy Hickling of Whitaker House for sending me a review copy.***

“Shar” grew up in western Michigan and graduated from Spring Arbor University. After college she traveled worldwide performing with a music group and then returned home to start teaching school. She married her childhood friend, Cecil MacLaren, with whom she raised two daughters (and now has three grandchildren). After over 30 years as a teacher, Shar asked God for a new mission that would fill her heart with the same kind of passion she’d felt for teaching and raising her family. She found her mission writing Christian romance, and since 2007 has released ten novels that have earned her numerous awards and an ever-increasing base of loyal readers who are comforted, inspired, and entertained by her books.

Ellie Booth is on the run from her bootlegging stepfather whom she’d witnessed murder a man in their home state of Kentucky. Landing in Wabash, Indiana, she seeks a cover identity and hastily marries Gage Cooper, a widower with four children. Ellie quickly falls in love with the Cooper kids, and, not long after, with their father. But tensions mount when Ellie’s stepfather picks up her trail and Gage discovers his new bride hasn’t been entirely honest with him. Filled with colorful historic detail, emotional drama, and lighthearted humor, Ellie’s Haven is the action-packed follow up to Livvie’s Song in MacLaren’s River of Hope Series, set in 1920’s Wabash, Indiana. 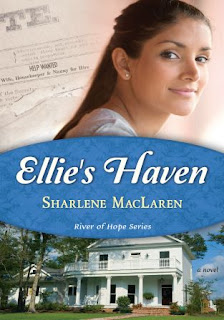 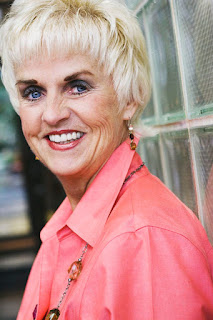 Ellie determined to purse her lips for the rest of the trip, lest some hint of the sordid murder slip past them. Best to keep it buried in the deepest parts of her soul.

My Review: A return visit to Wabash Indiana and Livvie. Our new character is Ellie Booth, who has grown up in the back woods of Athen, TN. She has led an hard life since her Dad passed away and her Mother remarried a very Evil man! Ellie and her Mother witness Bryron Pruitt kill Walter Sullivan, a Government Man. He forces Ellie to bury Walter, he has a gun pointed at her head!
In Wabash, Gage Cooper is desperate for someone to take care of his four children. The ten year old twins, Alec and Abe, Eight year old Frances, and almost four year old Tommy Lee. He posted in Livvie's dinner a request for a Wife...he has had so many Nannies quit.
Livvie tells him it is not the 1800's and Mail Order Brides, it's 1928!
There is a lot of action here, and some really sweet moments, and some very good chuckles!
I recommend this as a great read, loved it! Hope there are more books like this from Sharlene!
at February 02, 2012