***Special thanks to Camy Tang for sending me a review copy.*** 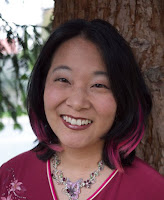 Camy Tang grew up in Hawaii and now lives in San Jose, California, with her engineer husband and rambunctious mutt, Snickers. She graduated from Stanford University and was a biologist researcher for 9 years, but now she writes full-time. She is a staff worker for her church youth group and leads one of the Sunday worship teams. On her blog, she ponders knitting, spinning wool, dogs, running, the Never Ending Diet, and other frivolous things. Visit her website at http://www.camytang.com/ to read short stories and subscribe to her quarterly newsletter.

After finally graduating with a culinary degree, Jennifer Lim is pressured by her family to work for her control-freak aunty’s restaurant. But after a family blowout, Jenn is determined to no longer be a doormat and instead starts her own catering company. Her search for a wine merchant brings John into her life—a tall, dark, handsome biker, in form-fitting black leather, and Hispanic to boot. It would be wonderfully wild to snag a man like that!

Shy engineer Edward tentatively tries out his birthday present from his winery-owner uncle—a Harley Davidson complete with the trimmings. Jennifer seems attracted to the rough, aggressive image, but it isn’t his real self. Is she latching onto him just to spite her horrified family? And if this spark between them is real, will showing her the true guy underneath put it out?

And what’s with the goat in the backyard?

The goat in the backyard had just eaten tonight’s dinner.

Jennifer Lim stood on her mother’s minuscule back porch and glared at the small brown and white creature polishing off her basil. She would have run shouting at it to leave off her herb garden, except it had already decimated the oregano, mint, rosemary, thyme, cilantro, and her precious basil, which had been slated for tonight’s pesto.

Besides, if it bit her, she was peeved enough to bite back.

“Mom!” She stomped back into the house. Thank goodness the pots of her special Malaysian basil were sectioned off in the large garden on the side of the house, protected by a wooden-framed wire gate. Jenn was growing it so that she could make her cousin Trish’s favorite chicken dish for her wedding, which Jenn was catering for her. But everything in her backyard garden was gone. The animal was welcome to the only thing left, the ragged juniper bushes. Were juniper bushes poison? If so, the animal was welcome to them.

“Mom!” Her voice had reached banshee range. “There is a goat—”

“You don’t need to yell.” Mom entered the kitchen, her lipstick bright red from a fresh application and her leather handbag over her arm, obviously ready to leave the house on some errand.

“Since when do we own a goat?”

“Since your cousin Larry brought him over.” She fished through her leather purse. “His name is Pookie.”

Jenn choked on her demand for an explanation, momentarily distracted. “He has a name?”

“He’s a living being. Of course he has a name.” Her mother fluttered eyelashes overloaded with mascara.

“Don’t give me that. You used to love to gross me out with stories of Great-Uncle Hao Chin eating goats back in China.”

Mom sniffed and found the refrigerator fascinating. “That’s your father’s side.”

Jenn swayed as the floor tilted. You are now entering … the Twilight Zone. Her parent had evoked that feeling quite often in the past few weeks. “Where did Larry get a goat and why do we have it now?”

Actually, Jenn could have answered her own question. That goat was in their backyard right now because everyone knew that her mom couldn’t say no to a termite who knocked on the door and asked if it could spend the night.

And outside of physically dropping the goat off at someone’s house—and she didn’t have an animal trailer, so that was out of the question—Jenn wouldn’t be able to get anyone else in the family to agree to take the animal, now that it was here. That meant leaving a goat in a niece’s backyard because no one else wanted to go through the hassle of doing anything about it.

Mom said, “You wouldn’t have me turn away family, would you?”

“Aunty Glenda?” No way. Even if Larry were thirty-one instead of twenty-one, Aunty would still dictate to her son the color underwear he wore that day—how much more his choice of pet?

“No.” Mom blinked as rapidly as she could with mascara making her short, stiff lashes stick together, almost gluing her eyes shut.

The tiger in Jenn’s ribcage growled. “Mother.” Her fist smacked onto her hip.

“Oh, all right.” Mom rolled her eyes as if she were still a teenager. “It belongs to Larry’s dormmate’s older brother, but really, he’s the nicest young man.” Burgundy lips pulled into what wanted to be a smile, but instead looked hideously desperate.

Jenn tried to count to ten but only got to two. “I know Larry’s a nice young man. If an abundance of immaturity counts as ‘nice’ points.”

“Jenn, really, you’re so intolerant. Just because you’re smart and went to Stanford for grad school …”

The name of her school—and the one dominant memory it brought up—made her neck jerk in a spasm. It had only been for two years, but that was enough. Desperately lonely after spending her undergrad years living with her cousins, Jenn had only formed a few friendships among the other grad students, none of them close. There was only one she’d never forget, although she vowed she would every morning when she got up and saw the scar in the mirror.

“Besides which, this is Cupertino. I’m sure there are city laws—”

“It’ll be gone before anyone notices—”

“Oh, ho, you’re right about that.” Jenn strode toward the phone on the wall. “I’m calling the Humane Society. They’ll take it.” Although they wouldn’t provide a trailer to transport it. How was she going to take the goat anywhere, much less to an animal shelter?

Mom plopped onto a stool and sighed. “That boy was so cute. His name was Brad.”

There went her neck spasming again. But Brad was a common name. She grabbed the phone.

“Such a nice Chinese boy. Related to the Yip family—you know, the ones in Mountain View?”

The phone slipped from her hand and bungee-jumped toward the floor, saved only by the curly cord. She bent to snatch it up, but dizziness shrouded her vision and she had to take a few breaths before straightening up.

“Oh, and he went to Stanford. You two have something in common.” Mom beamed.

Mom’s eyes lighted up. “Do you know him?”

Sure, she knew him. Knew the next time he came for his goat she’d ram her chef’s knife, Michael Meyers style, right between his eyes.

My Review:What an enjoyable very fast read...only 104 pages. Be ready for some great laughs!
Jenn has grown up to respect her elders and after graduating from Culinary School, her Aunty expects her to run her restaurant.
Her Mom can't say "No" to anyone, and then Jenn ends up with a goat in her back yard. I love it!!! There are some serious issues, and a touch of romance. Enjoy traveling on a Motorcycle, squirt gun raids, and more!
at October 03, 2011