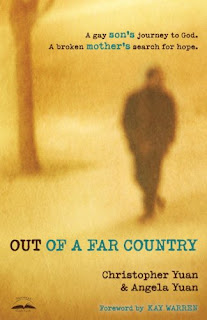 Synopsis from BN:
Coming Out, Then Coming Home

Christopher Yuan, the son of Chinese immigrants, discovered at an early age that he was different. He was attracted to other boys. As he grew into adulthood, his mother, Angela, hoped to control the situation. Instead, she found that her son and her life were spiraling out of control—and her own personal demons were determined to defeat her.

Years of heartbreak, confusion, and prayer followed before the Yuans found a place of complete surrender, which is God’s desire for all families. Their amazing story, told from the perspectives of both mother and son, offers hope for anyone affected by homosexuality.

God calls all who are lost to come home to him. Casting a compelling vision for holy sexuality, Out of a Far Country speaks to prodigals, parents of prodigals, and those wanting to minister to the gay community.

“But while he was still a long way off, his father saw him and felt compassion, and ran and embraced him and kissed him.” - Luke 15:20

Includes a discussion guide for personal reflection and group use.

My Review: Didn't know what to expect when I chose to read this book. The subject mater is not warm and fuzzy, it is written by Christopher [son]and Angela Yuan his Mom.
Angela and her Husband Leon are immigrants from China. At the beginning of this book Angela is an atheist and her husband a nominal Catholic. Their 2 boys are agnostic...Christopher admits in the book that he believed in God, but did not worship him. Love the way the Lord worked in all of their lives.
Angela and Christoper alternate the chapters and give their points of view.
In the beginning Angela is so depressed and suicidal. She and her husband have nothing in common, and her Son has come out of the closet as being Gay.
Christopher goes to Dental School in Louisville KY. There he gets heavily into drugs and the Gay Scene. He gets about a low as one can go. Until he ends up in Atlanta and there his life will start to turn around when he is arrested.
Actually Angela was hoping for this...she told the Judge not to let him out until he accepts Jesus as his Savior.
Christopher had to hit rock bottom, and finally began to find his way. Wow!! Loved his Chapter 30 on "Holy Sexuality". Not at all what I was expecting...he has turned his life around and now lives to serve Christ.
Don't miss this amazing book! There is an Epilogue included and will bring you up to date in their lives!
I was provided a copy of this book by Waterbrook, the opinions are my own.
at May 18, 2011