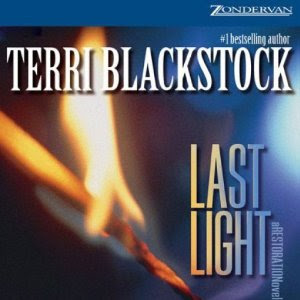 Description
In the face of a crisis that sweeps an entire high-tech planet back to the age before electricity, Deni Branning's career ambitions have vanished. She's not about to let her dream of marriage go as well.

But keeping it alive will require extraordinary measures. Yesterday's world is gone. All Deni and her family have left is each other and their neighbors. Their little community will either stand or fall together. But they're only beginning to realize that, and trust doesn't come easily.

Particularly when one of them is a killer.

Best-selling suspense author Terri Blackstock weaves a masterful what-if novel in which global catastrophe reveals the darkness in human hearts and lights the way to restoration for a self-centered world.

This series was recommended to me by my Library. They told me they bought the first book in the series and enjoyed it so much that they bought the series. I tried the first one....it is awesome!
Not know what to expect...the first book starts out at the Airport. Just after Deni Branning arrives, she and her Dad are on their way to pick up her bags. All of a sudden planes start falling out of the sky...the power goes out. Made me think this is the end of the world.
What would I do if we totally lost everything that has electrical components? The list is endless! Even cars stopped filling the highways.
The story keeps you thinking all the way to the end. There are unfortunately those people who are interested in greed only. Through it all some of the people, including the Brannings, learn to lean on God. Loved how their faith grew in the face of adversity.
Highly recommend this!