The Secrets of Harmony Grove by Mindy Starns Clark 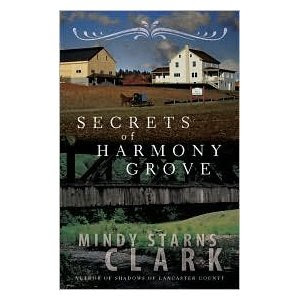 Synopsis: Sienna Collins, owner of the Harmony Grove Bed & Breakfast in Lancaster County, Pennsylvania, learns that she is under investigation by the federal government for crimes she knows nothing about. A few hours later she finds her ex-boyfriend, Troy, dead, and her life and livelihood begin to spin wildly out of control. She begins to doubt everyone around her, even the handsome detective assigned to the case.

As Sienna tries to clear her name, she is forced to depend on her faith, the wisdom of the Amish, and the insight of the man she has recently begun dating. She’ll need all the help she can get, because the secrets she uncovers in Harmony Grove end up threatening not just her bed-and-breakfast, but also her credibility, her beliefs, and ultimately her life.

Sienna's Grandfather had been brought up Amish, but her Dad and his family had not. The setting for her Inn is an Amish Community. She does have a lot of Amish family who live around her inn and help her.

The spin on this story will take you from a serene Amish community to Nazi Germany and the Concentration Camps. There is a lot twist and turns in the story, including Mob involvement. There is also her Grandfather's PTSD from the War. Just when you think you know what is going on...something else happens. It becomes a real page turner...keep them coming Mindy!