Scars Of A Chef: The Searing Story of a Top Chef Marked Forever by the Grit and Grace of Life in the Kitchen by Rick Tramonto 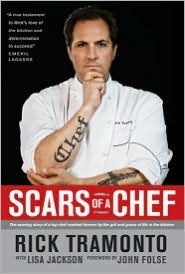 Synopsis Rick Tramonto started as a high school dropout working at Wendy’s; he became one of the hottest celebrity chefs in the world. Yet his rise to culinary success was marked with tragedy, loss, and abandonment. As a teenager, Rick worked to support the family when his father (who had Mob ties) went to prison. As a young adult, he struggled with a learning disability and drug addiction. Yet as a chef, he rose rapidly to culinary stardom, earning rave reviews and eventually opening the famous four-star establishment Tru. From the outside, it looked like he had everything he ever wanted; his lifelong hunger for meaning should have been more than met. But on the inside, his life and his marriage were falling apart. And then, one night, a voice on the radio changed everything. Containing recipes and color photos, Scars of a Chef is the mesmerizing rags-to-riches memoir of one chef’s journey through the highest heights and the lowest lows of the culinary world . . . and his search for something that would finally heal his wounds and sustain him through even the darkest times.
I enjoyed reading Rick's life story and glad that he has more to go. Even when he wasn't a believer early in his life I can see God's hand in there! He had a rough time as a child, his parents home was very dysfunctional. Am glad that he did have the support of loving Grandparents, Aunts, Uncles, and cousins.
He is an over achiever, the amount of time he put into honing his craft, and the success he achieved. He is a very inspiring man, and willing to do all that he could to learn to be the very best!
I loved that the book included pictures, putting faces to the people that are talked about in the book. Also included are some yummy recipes though out!
A must read of any young aspiring chefs!
Disclosure of Material Connection: I received this book free from Tyndale House Publishing. I was not required to write a positive review. The opinions I have expressed are my own. I am disclosing this in accordance with the Federal Trade Commission’s 16 CFR, Part 255: “Guides Concerning the Use of Endorsements and Testimonials in Advertising.
at March 05, 2011