Celebrate Lit Presents: To Bring You Back by Emily Conrad

Book: To Bring You Back

He’s determined to confront the past she’s desperate to forget.

Broke in more ways than one, the last thing Adeline Green can afford is for her now-famous high school crush to descend on her quiet life.

People in the small town of Lakeshore, Wisconsin, think of her as the hard-working church secretary or as the local food truck’s lunch-hour cashier. They’d never suspect the shame she’s hiding.

She attended high school with both the lead singer and the drummer of the rock band, Awestruck. In fact, she used to play in the band herself, but that was back before Awestruck made it big—and before her relationship with lead singer Gannon Vaughn took a turn that ultimately led to tragedy and heartbreak.

She’s living a different life now, but when Gannon shows up, he brings with him a public spotlight that threatens to expose her deepest regret. The closer she gets to him, the more she risks the carefully curated life that’s finally brought her a measure of peace.

Gannon Vaughn and his rock band, Awestruck, have conquered the music industry, but he can’t overcome his feelings for Adeline.

She may have been right to cut off contact between them years ago, but thanks to the grace of God, he’s a changed man. When he hears Adeline’s struggling, he sets out to turn her life around and win back the love he lost to poor choices eight years ago.

But when Gannon’s fame and their mutual regrets jeopardize their relationship anew, will grace be enough to bring them back to God and each other?

A meaningful Christian romance with a side of fame and fortune for readers who enjoy faith-filled escapes and happily-ever-afters where no one is beyond hope of redemption.

Emily Conrad writes contemporary Christian romance that explores life’s relevant questions. Though she likes to think some of her characters are pretty great, the ultimate hero of her stories (including the one she’s living) is Jesus. She lives in Wisconsin with her husband and their energetic coonhound rescue. Learn more about her and her books at emilyconradauthor.com.

A Guilty Pleasure with a Purpose

When a reader called the Rhythms of Redemption Romances a guilty pleasure, I had to smile because that’s exactly what To Bring You Back, the first book in the series, was to me as I wrote it.

Don’t get me wrong, To Bring You Back is firmly Christian fiction, and it’s not “guilty” of being blush-inducing. Because of the characters’ history, theirs is a slow-burn romance that focuses more on the emotional side of their relationship than the physical.

But, To Bring You Back is a rock star romance.

When I first started writing it, I was embarrassed to admit that’s what I was working on.

After all, rock star romance has a reputation for being an unrealistic and shallow escape from reality with “guilty pleasure” written all over it.

Maybe there was some of that escapism going on. At that point in my writing journey, I was dealing with disillusionment, and I enjoyed the break of writing about rich and famous characters.

However, as I wrote To Bring You Back and went on to read others’ romances about famous characters, I found that the characters’ occupations and net worth don’t impact the most important elements of their stories.

The tales can still showcase meaningful relationships and God at work in the lives of people who—rich and famous or not—need redemption.

Fame, money, and music help up the entertainment value, but those same features add even more rich conflict to explore.

The men of Awestruck, starting with lead singer Gannon Vaughn in To Bring You Back, have allowed me to ask questions like: How good is grace? What does it mean to live in forgiveness? What gives a person worth? And, when is living the dream no longer worth the price?

To write this post, I took a break from working on the first draft of the final book in the series, and it’s been fun to look back and see how much my opinion of these stories has changed.

It’s my prayer that He’ll also use them in your life, both to explore meaningful questions and to provide a few hours of entertaining escape.

For Him and My Family, May 1

Spoken from the Heart, May 1

Because I said so — and other adventures in Parenting, May 3

Locks, Hooks and Books, May 4

Truth and Grace Homeschool Academy, May 5

Happily Managing a Household of Boys, May 6

Pause for Tales, May 8

Of Blades and Thorns, May 8 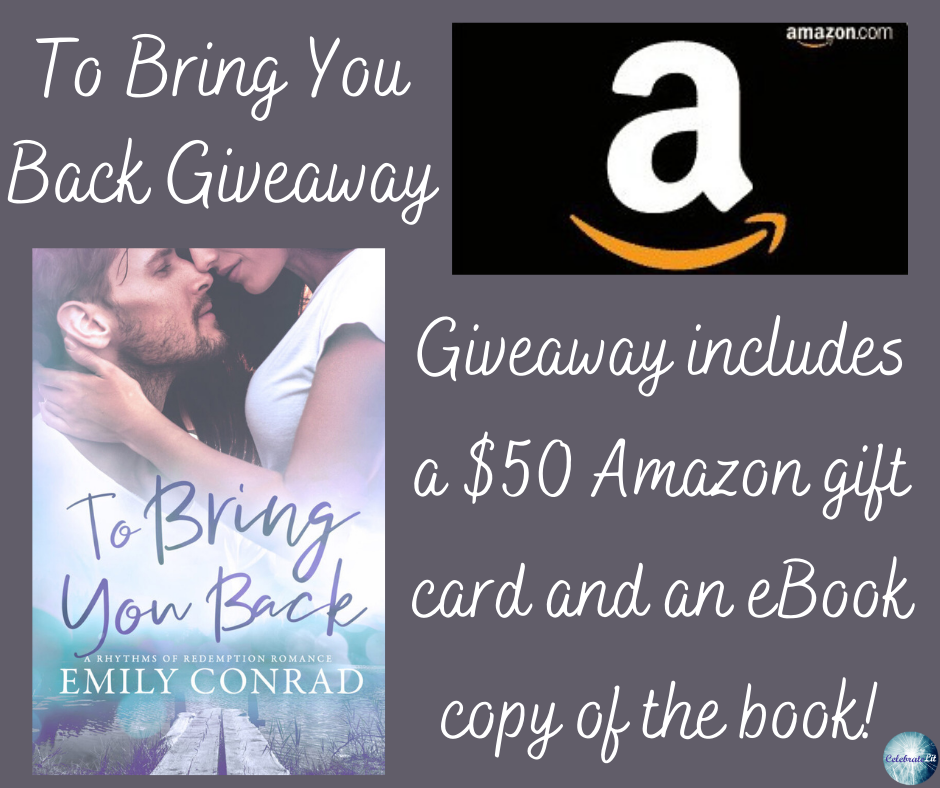 To celebrate her tour, Emily is giving away the grand prize package of a $50 Amazon gift card and an ecopy of To Bring You Back!!