Too Deep for Words (Shenandoah Valley Saga #2) by Andrea Boeshaar 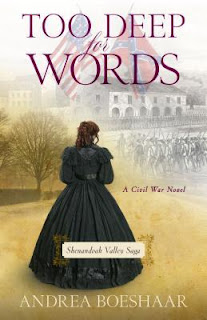 Carrie Ann Collier has been a newlywed for nineteen blissful days--as blissful as life can be in the midst of war, that is. Soon that war will take a toll she never expected. When her new husband, Peyton, goes missing during battle, she refuses to believe he is dead, and must find a way to move forward with everyday life in the face of fear.

As Carrie struggles with how to welcome her estranged sister, Margaret, back into her life, another new arrival appears on her doorstep--her husband's best friend, and rebel officer, Eli. Wounded and bitter, Eli is nonetheless committed to keeping his promise to Peyton: take care of the Collier women, no matter what. But to Carrie, he's a painful reminder of her lost love.

Then unexpected news makes Carrie wonder if miracles do happen. If Carrie infiltrates the enemy once again, she might find out what really happened to the love of her life. Will Eli be able to keep his promise to keep her safe? Can they forgive each other if promises are broken?

As fans of Boeshaar's books have come to expect, Too Deep for Words is a meticulously researched novel. Readers are taken directly into the heart of the realities of the Civil War and reminded how, even in the darkest circumstances, faith in Christ offers hope.

This is the second book in the Shenandoah Valley Saga, A Civil War Novel, and the second read that puts you on the battlefield, and then in the home of those affected by the ravages of war.
As the book opens we have a young couple, married only a few weeks, and he goes off to a meeting, they have only one night before he goes off again as an officer in the Northern Army. What happens and the regrets she feels is typical, but now she has to keep them forever as her Peyton is declared killed in battle, but for Carrie Ann her heart is telling her no.
As the book progresses Aunt Ruth persuades the family to move to their home in Washington D. C., and while there your heart will break as Carrie Ann, and her now returned sister Margaret, search the hospitals for the wounded.
We have Peyton’s friend Eli now in charge of her family’s finances, per her husband’s request, a rebel in charge? We also see that Eli really wants more than just financially take care of his friends widow, he wants her, guess we should remember that this is not something new.
When circumstance present themselves for Eli and Carrie to be in the same place at the same time, will Eli finally be able to win Carrie, or will she be unable to give her heart to anyone else. What about Margaret and her previous life as a servant, and what if she runs into someone she drugged?
With the ending of this book, and you will quickly be there, I still have questions, and hope that answers will be forthcoming, but know that each book can stand alone, but if you read one you will be hooked and fall in love with this series.
I received this book through Kregel Publishing Book Blogger Program, and was not required to give a positive review.