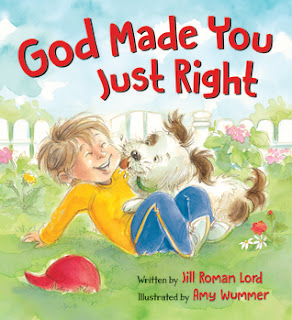 Here is a message that every parent will want to share with his or her child: “You’re brilliantly created and there’s no one else like you!” With easy-to-understand descriptions and simple, rhyming text, Jill Roman Lord shares the message that God created each of us in just the right way in a manner that even the youngest child will understand. Bright and engaging illustrations from Amy Wummer pair perfectly with the text and enhance the appeal of the book.

After winning her first writing contest in first grade with an essay called “Patrol Boys are my Friends," Jill couldn’t keep herself from writing. As she grew, she soon found that with every boy she liked, every new friendship formed, every break of her heart, she wrote a poem and forever stashed it away in her file called “Stuff I Wrote”.
Eventually she tried to write “stuff” for publication. In fact, she received her first request from a publisher for a completed manuscript when she was 9 months pregnant with her third child. Jill literally finished tweaking the manuscript between contractions in the hospital! It paid off with the acceptance of the manuscript, publication of her first book, and a bouncing baby boy!
She continued writing stories for children and over the next few years accumulated enough rejections to jam a file drawer. She has quit several times, cried puddles of tears on her back porch vowing never to write again, only to hear one of her children say, “You have to write, Mommy. You’re a writer.”
With those words and eventually the nudge from a "squirrel" she became a committed writer and loves it despite the rejections. Her eleventh book, The First Easter, will be released in the spring of 2013 by Candy Cane Press. Also watch for a Thanksgiving Book coming out in 2013, as well! Check out her book page for other books she’s written.
She lives in Charlotte, NC with her husband, three children and Golden Retriever. She enjoys running, hiking, golfing and cheering for her children in their sports and activities.

This book is just the right size for toddler’s hands and made of sturdy cardboard, no pages will get ripped while they carry it to you to snuggle and read for them.
Love the bright colors, and all the boys and girls doing different activities that you and your little one can talk about! There is sweet rhyming text to keep their attention, with a great lesson that God made each of us the right way, he knew what he was doing.
A great book for that little one in your life, you will not be disappointed.

Dwell on These Things Inspiration Cards: 31 Thoughts to Align Your Heart with God's Truth by John Stange

Your daily inspiration is never far from reach with this unique set of cards that encourage you to see yourself through God's eyes, ...