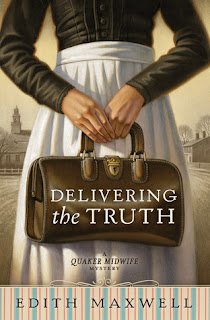 Quaker midwife Rose Carroll hears secrets and keeps con­fi­dences as she attends births of the rich and poor alike in an 1888 Massachusetts mill town. When the town’s world-famed car­riage indus­try is threat­ened by the work of an arson­ist, and a car­riage fac­tory owner’s adult son is stabbed to death with Rose's own knitting needle, she is drawn into solv­ing the mys­tery. Things get dicey after the same owner’s mis­tress is also mur­dered, leav­ing her one-week-old baby with­out a mother. The Quaker poet and abolitionist John Greenleaf Whittier helps Rose by lending words of advice and support. While strug­gling with being less than the per­fect Friend, Rose draws on her strengths as a counselor and prob­lem solver to bring two mur­der­ers to justice before they destroy the town’s carriage industry and the people who run it. 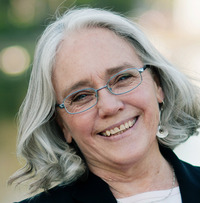 Edith Maxwell is an Agatha-nominated mystery author. MURDER MOST FOWL, book four in her Local Foods Mystery series, releases in 2016. Edith once owned and operated the smallest certified-organic farm in Essex County, Massachusetts.

Edith also writes the historical Quaker Midwife Mysteries. DELIVERING THE TRUTH, featuring a Quaker midwife sleuth in 1888, releases in April, 2016. Edith is Clerk of Amesbury Friends Meeting. Her story, "A Questionable Death," is nominated for an Agath Award for Best Short Story.

Her short stories have appeared in more than a dozen juried anthologies and magazines. She is active in Mystery Writers of America and Sisters in Crime and is the Vice President of SINC New England.

Edith, a fourth-generation Californian, has two grown sons and lives in an antique house north of Boston with her beau, their three cats, a small organic garden, and some impressive garden statuary. She worked as a software technical writer for almost two decades but now writes fiction full time.

We get a real look into Quaker life in this story set in Amesbury, Massachusetts, in 1888. We meet midwife Rose Carroll as she goes about her work of helping women with their births and the babies as they spend their first few weeks on earth.
Rose has taken up residence with her deceased sister’s family, and uses their porch for her bedroom and office. Life seems rather routine until the lifeblood of the town goes up in smoke. There are three factories burned to the ground taking many lives with it, and it was arson.
Now Rose is privy to a lot of the goings on in this community as she goes about her work, and she has her suspicions as to who would have committed such a heinous act. Things go from bad to worse as murders start happening, and Rose becomes involved again.
There is also a bit of romance going on between Doctor David and Rose, but then there is also his mother and her want of an upper class woman for a wife for him, you will wonder how that will work out.
In the end I was wondering who would end up surviving with all the evil going on, and what a surprise when you find out the perpetrator of these crimes.
I enjoyed this quick interesting read, and once you pick it up you will want to read until the end, you need the answers.
I received this book through Net Galley and the publisher Midnight Ink, and was not required to give a positive review.