The Kashmir Shawl by Rosie Thomas 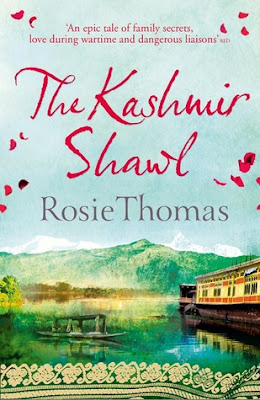 Spanning decades and moving from the stark beauty of the Welsh landscape to the Himalayas and Kashmir, this is a story of bravery, courage and love.Within one exotic land lie the secrets of a lifetime…Newlywed Nerys Watkins leaves rural Wales for the first time in her life, to accompany her husband on a missionary posting to India. Travelling from lonely Ladakh, high up in the Himalayas, Nerys discovers a new world in the lakeside city of Srinagar. Here, in the exquisite heart of Kashmir, the British live on carved wooden houseboats and dance, flirt and gossip as if there is no war.But the battles draw ever closer, and life in Srinagar becomes less frivolous when the men are sent away to fight. Nerys is caught up in a dangerous friendship, and by the time she is reunited with her husband, the innocent Welsh bride has become a different woman.Years later, when Mair Ellis clears out her father’s house, she finds an exquisite antique shawl, woven from the finest yarns and embroidered in the shades of lake water and mountain skies. Wrapped within its folds is a lock of child’s hair. Tracing her grandparents’ roots back to Kashmir, Mair embarks on a quest that will change her life forever. 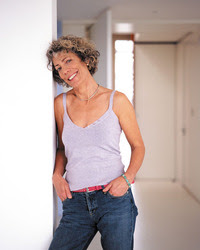 Rosie Thomas is a writer, currently living in London. Her numerous novels, several of them top ten bestsellers, deal with the common themes of love and loss.

She is the author of a number of celebrated novels, including the bestsellers Sun at Midnight, Iris and Ruby and Constance. Once she was established as a writer and her children were grown, she discovered a love of traveling and mountaineering. She has climbed in the Alps and the Himalayas, competed in the Peking to Paris car rally, spent time on a tiny Bulgarian research station in Antarctica and traveled the silk road through Asia. She lives in London.

What a story Rosie Thomas was written, she had me walking with the Characters through the streets in India. I could almost smell the goats, as was described. We experience the life with the Raj, and the slums.
The story begins with the death of her father, Mair finds a beautiful Kashmir Shawl among the belongings. She also finds an old envelope with some hair stored in it. Thus begins her quest for answers, and her trip to India.
There are actually two stories told here, some of it we know but Mair never has all the answers. Mair's Grandmother Nerys and Grandfather Evan are missionaries to India, with WWII going on in 1941, we are about to experience life there. Nerys spends time with Myrtle, and Carolyn, you will enjoy the fun times they make out adversity.
I really recommend this as a Historical read, so very interesting. Even when Mair goes there, there is fighting between the Hindu's and the Muslims. So very sad.
Putting this combined story together is a real page turner, and even though the book is a bit long, it was a quick read.

I received this book through The Bookreporter giveaway, and was not required to give a positive review.