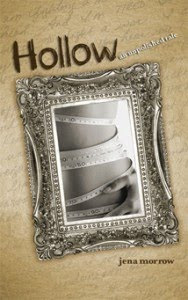 The Beauty of Brokenness (and Giveaway of Hollow by Jena Morrow!)
By: Jena Morrow, author of Hollow: An Unpolished Tale, which is today’s featured giveaway! Read on for details on how to win a copy of Hollow…

I love Mosaics. I love to look at each tiny little piece of broken tile, and try to see it first as separate from the whole, as a fraction of the thing it once was. Did it used to have a life of its own, maybe as a vase or a plate, before it met its shattering fate? How did it break? Was it dropped, mishandled, intentionally destroyed for a larger purpose? I love that the pieces haven’t been thrown away or wasted, but that the artist saw their remaining (or maybe enduring) value, and picked them up and said, “I can use you.”

Mosaics are cool, because they are a little visual allegory of the way God works. Human beings, it seems, are even more prone to breaking than ceramic or clay. When I think of all the people who have most touched my life, whose words and deeds and legacies have helped to form and shape me, I am taken by the realization of something they all seem to have in common: they are, or were, decidedly imperfect. They are works in progress, turning their messes into messages and their tests into testimonies. Some of them are, indeed, a bit rough around the edges, and I suspect that their creator and mine is okay with that.

People who have been through a bit of fire, who have lived and learned, who have shed some lifeblood and come out the better for it, are effortlessly inspirational. They don’t have to try too hard to be pithy or poignant or witty or wise, because the fact that they are still here speaks volumes before they ever have to say a word. They have a wide-eyed wonder at having endured, having been spared, that is contagious.

They are the recovered addicts, the tenderhearted former bullies, the learning-disabled scholars, the wounded healers. Their lives speak, encouraging others to press on, to trust in the restorative hand and heart of God.

I remember an early concert given by the late Rich Mullins, the well-known Christian songwriter, wherein he reached for his guitar to play an acoustic ballad, and as he began to play, he started laughing and admitted, “This guitar is terminally out of tune, but I tend to think things are boring if they’re really fine.” The audience chuckled, because part of the appeal of Rich was that he was, in fact, quite rough around the edges. He didn’t stop to tune the guitar; he started the song over again, still with the same out-of-tune instrument.

I like his style; Rich could appreciate the brokenness in both people and things, because he himself was admittedly broken. And maybe he was right; maybe pristine equals dull, and flawed equals interesting. And if that’s the case, if all of us who are flawed and imperfect are more interesting and valuable for our brokenness, then maybe we can learn to embrace our shattered lives as a new kind of creation, like a mosaic. Maybe we can learn to be just a little bit more grateful for where we are, in light of where we were. Maybe we can remember that in our weakness, God’s strength is made perfect. And maybe, just maybe, broken will become the new beautiful.

Hollow: An Unpolished Tale is Jena’s memoir of her struggle with an eating disorder. It is not a polished tale of victory but an honest, true story of fragility. We have 3 copies for giveaways! Here’s how you can enter to win, and it’s not too late to enter to win the Kindle, just hop over to this post for details.
at January 19, 2011